December 8th, 2019 - By Amy Steele - Comments Off on Nordson (NASDAQ:NDSN) Cut to Sell at Zacks Investment Research
Filed Under: Analyst Articles - US - Finance

Zacks Investment Research lowered shares of Nordson (NASDAQ:NDSN) from a hold rating to a sell rating in a report released on Thursday morning, Zacks.com reports. They currently have $173.00 target price on the industrial products company’s stock.

According to Zacks, “Nordson stands to benefit from the diversified product portfolio and large customer base in end markets. Also, business acquisitions are likely to prove beneficial to the company. For instance, the buyout of Optical Control has been strengthening its Advanced Technology Systems segment. Also, the company’s continuous focus on rewarding shareholders handsomely through dividends and share buybacks will work in its favor. Over the past three months, its shares have outperformed its industry. However, the stock has been significantly overvalued compared with the industry over the same time frame. Also, high debt levels remain concerning. In addition, forex woes are likely to hurt sales growth by 2% in fiscal 2019. Further, analysts have become increasingly bearish on the company in the past 60 days.”

Nordson Corporation engineers, manufactures, and markets products and systems to dispense, apply, and control adhesives, coatings, polymers, sealants, biomaterials, and other fluids worldwide. Its Adhesive Dispensing Systems segment provides dispensing, coating, and laminating systems for adhesives, lotions, liquids, and fibers to disposable products and roll goods; automated adhesive dispensing systems used in packaged goods industries; components and systems used in the thermoplastic melt stream; and product assembly systems for use in paper and paperboard converting applications, and manufacturing roll goods, as well as for the assembly of plastic, metal, and wood products.

Read More: What is the accumulation/distribution indicator? 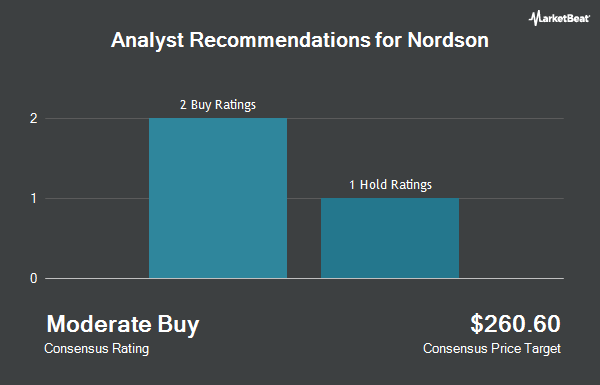 Receive News & Ratings for Nordson Daily - Enter your email address below to receive a concise daily summary of the latest news and analysts' ratings for Nordson and related companies with MarketBeat.com's FREE daily email newsletter.