Loop Capital cut shares of Ingevity (NYSE:NGVT) from a buy rating to a hold rating in a research note released on Friday morning, BenzingaRatingsTable reports. They currently have $96.00 price objective on the stock.

Several other equities research analysts have also recently issued reports on the company. SunTrust Banks decreased their price objective on Ingevity to $120.00 and set a buy rating on the stock in a report on Friday, October 25th. They noted that the move was a valuation call. ValuEngine upgraded Ingevity from a sell rating to a hold rating in a research note on Saturday, October 19th. BMO Capital Markets reduced their target price on Ingevity to $121.00 and set an outperform rating on the stock in a research report on Monday, October 28th. Wells Fargo & Co initiated coverage on Ingevity in a research note on Tuesday, October 15th. They issued an outperform rating and a $100.00 price target on the stock. Finally, Stifel Nicolaus lowered their price target on Ingevity from $109.00 to $99.00 and set a hold rating for the company in a report on Wednesday, September 25th. Five analysts have rated the stock with a hold rating and five have given a buy rating to the company’s stock. The stock has an average rating of Buy and a consensus price target of $111.89.

Ingevity (NYSE:NGVT) last released its earnings results on Wednesday, October 23rd. The company reported $1.46 EPS for the quarter, topping the Thomson Reuters’ consensus estimate of $1.42 by $0.04. The firm had revenue of $359.90 million during the quarter, compared to analysts’ expectations of $365.44 million. Ingevity had a net margin of 14.31% and a return on equity of 53.69%. Ingevity’s revenue for the quarter was up 15.6% on a year-over-year basis. During the same period in the previous year, the company earned $1.16 EPS. Equities analysts expect that Ingevity will post 4.79 EPS for the current fiscal year. 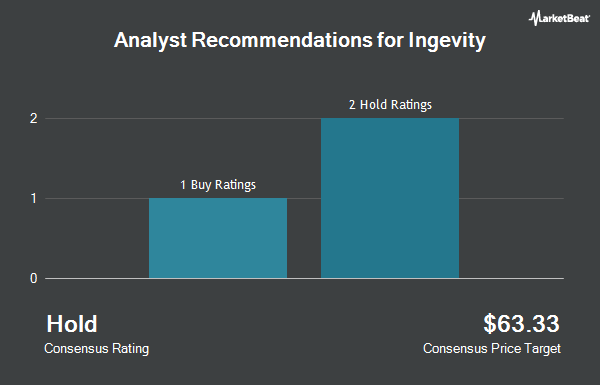 Receive News & Ratings for Ingevity Daily - Enter your email address below to receive a concise daily summary of the latest news and analysts' ratings for Ingevity and related companies with MarketBeat.com's FREE daily email newsletter.