Brokerages expect ORBCOMM Inc (NASDAQ:ORBC) to report earnings per share (EPS) of ($0.05) for the current fiscal quarter, according to Zacks. Three analysts have provided estimates for ORBCOMM’s earnings. The lowest EPS estimate is ($0.06) and the highest is ($0.02). ORBCOMM reported earnings per share of ($0.07) in the same quarter last year, which indicates a positive year-over-year growth rate of 28.6%. The business is scheduled to report its next quarterly earnings results on Wednesday, February 26th.

On average, analysts expect that ORBCOMM will report full-year earnings of ($0.25) per share for the current financial year, with EPS estimates ranging from ($0.26) to ($0.21). For the next fiscal year, analysts expect that the company will report earnings of ($0.13) per share, with EPS estimates ranging from ($0.19) to ($0.09). Zacks Investment Research’s earnings per share averages are an average based on a survey of research analysts that that provide coverage for ORBCOMM.

ORBCOMM (NASDAQ:ORBC) last announced its quarterly earnings data on Wednesday, October 30th. The technology company reported ($0.05) earnings per share (EPS) for the quarter, meeting analysts’ consensus estimates of ($0.05). ORBCOMM had a negative net margin of 8.03% and a negative return on equity of 8.61%. The company had revenue of $69.19 million during the quarter, compared to analysts’ expectations of $71.43 million. During the same quarter in the prior year, the company posted ($0.04) EPS. The business’s revenue was down 2.6% on a year-over-year basis.

In other news, major shareholder Adage Capital Partners Gp, L.L sold 112,901 shares of the company’s stock in a transaction dated Wednesday, November 20th. The shares were sold at an average price of $4.04, for a total value of $456,120.04. The transaction was disclosed in a document filed with the SEC, which is available at this hyperlink. Also, CFO Constantine Milcos bought 15,000 shares of the stock in a transaction dated Wednesday, September 11th. The stock was purchased at an average cost of $5.25 per share, for a total transaction of $78,750.00. Following the acquisition, the chief financial officer now owns 48,367 shares in the company, valued at approximately $253,926.75. The disclosure for this purchase can be found here. In the last ninety days, insiders bought 53,000 shares of company stock worth $246,110. 7.30% of the stock is owned by insiders.

See Also: What is a good rate of return for a mutual fund? 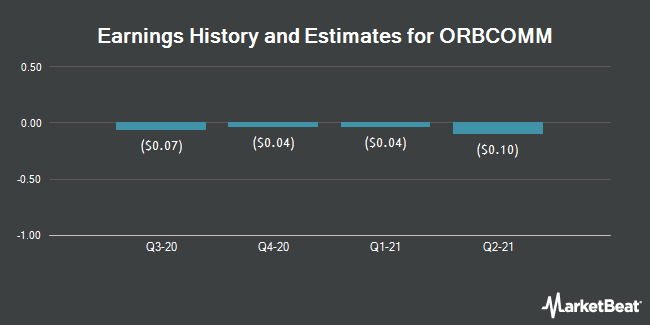 Receive News & Ratings for ORBCOMM Daily - Enter your email address below to receive a concise daily summary of the latest news and analysts' ratings for ORBCOMM and related companies with MarketBeat.com's FREE daily email newsletter.