December 11th, 2019 - By Amy Steele - Comments Off on Mastercard (NYSE:MA) Price Target Increased to $340.00 by Analysts at SunTrust Banks
Filed Under: Analyst Articles - US - Finance

Mastercard (NYSE:MA) had its price target boosted by investment analysts at SunTrust Banks to $340.00 in a research note issued on Wednesday, The Fly reports. The brokerage presently has a “buy” rating on the credit services provider’s stock. SunTrust Banks’ target price points to a potential upside of 17.81% from the stock’s current price.

Mastercard (NYSE:MA) last announced its quarterly earnings results on Tuesday, October 29th. The credit services provider reported $2.15 earnings per share (EPS) for the quarter, topping the consensus estimate of $2.01 by $0.14. Mastercard had a return on equity of 146.92% and a net margin of 42.50%. The business had revenue of $4.47 billion for the quarter, compared to analyst estimates of $4.41 billion. During the same quarter in the prior year, the company earned $1.78 earnings per share. The company’s quarterly revenue was up 14.6% on a year-over-year basis. On average, sell-side analysts expect that Mastercard will post 7.69 EPS for the current year.

Mastercard declared that its board has initiated a share buyback program on Tuesday, December 3rd that permits the company to buyback $8.00 billion in outstanding shares. This buyback authorization permits the credit services provider to repurchase up to 2.7% of its shares through open market purchases. Shares buyback programs are often a sign that the company’s board of directors believes its shares are undervalued. 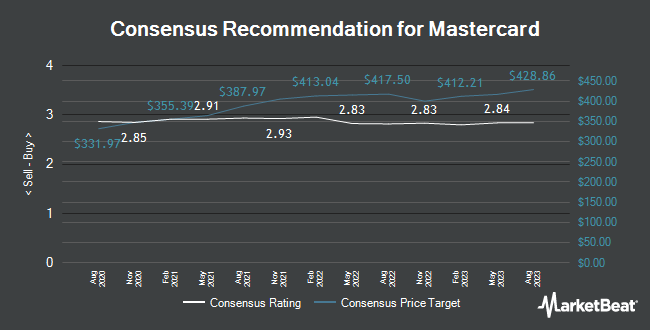