FMC Corp (NYSE:FMC) insider Nicholas Pfeiffer sold 3,379 shares of the company’s stock in a transaction that occurred on Tuesday, December 10th. The shares were sold at an average price of $98.93, for a total value of $334,284.47. Following the completion of the transaction, the insider now directly owns 10,925 shares in the company, valued at $1,080,810.25. The transaction was disclosed in a filing with the SEC, which is available at this link.

FMC (NYSE:FMC) last posted its quarterly earnings data on Tuesday, October 29th. The basic materials company reported $0.94 EPS for the quarter, topping the consensus estimate of $0.80 by $0.14. The firm had revenue of $1,000.00 million during the quarter, compared to analyst estimates of $978.47 million. FMC had a return on equity of 27.94% and a net margin of 11.08%. FMC’s revenue was down 3.5% on a year-over-year basis. During the same period in the prior year, the business posted $0.98 EPS. As a group, research analysts forecast that FMC Corp will post 5.86 EPS for the current fiscal year.

FMC Corporation, a diversified chemical company, provides solutions, applications, and products for the agricultural, consumer, and industrial markets worldwide. The company operates in two segments, FMC Agricultural Solutions and FMC Lithium. The FMC Agricultural Solutions segment develops, manufactures, markets, and sells crop protection chemicals, including insecticides, herbicides, and fungicides that are used in agriculture to enhance crop yield and quality by controlling a range of insects, weeds, and diseases, as well as in non-agricultural markets for pest control.

Recommended Story: What is meant by holder of record? 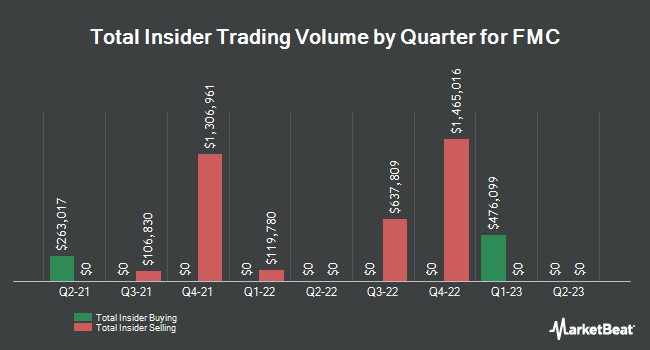 Receive News & Ratings for FMC Daily - Enter your email address below to receive a concise daily summary of the latest news and analysts' ratings for FMC and related companies with MarketBeat.com's FREE daily email newsletter.