Nevro Corp (NYSE:NVRO) CFO Andrew H. Galligan sold 17,718 shares of the company’s stock in a transaction that occurred on Wednesday, January 8th. The stock was sold at an average price of $120.11, for a total transaction of $2,128,108.98. The transaction was disclosed in a legal filing with the SEC, which is accessible through the SEC website.

Nevro (NYSE:NVRO) last posted its quarterly earnings data on Wednesday, November 6th. The medical equipment provider reported ($0.58) earnings per share for the quarter, beating the Thomson Reuters’ consensus estimate of ($0.85) by $0.27. The business had revenue of $100.16 million during the quarter, compared to the consensus estimate of $92.27 million. Nevro had a negative return on equity of 46.35% and a negative net margin of 25.94%. The company’s revenue was up 4.7% compared to the same quarter last year. During the same period in the prior year, the company earned ($0.37) earnings per share. As a group, equities analysts predict that Nevro Corp will post -3.69 earnings per share for the current year.

Nevro Corp., a medical device company, provides products for the patients suffering from chronic pain in the United States and internationally. The company develops and commercializes the Senza spinal cord stimulation system, an evidence-based neuromodulation platform for the treatment of chronic pain.

Featured Article: Diversification in Your Portfolio 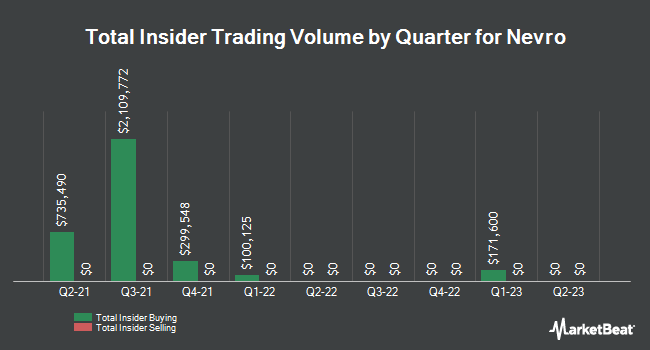 Receive News & Ratings for Nevro Daily - Enter your email address below to receive a concise daily summary of the latest news and analysts' ratings for Nevro and related companies with MarketBeat.com's FREE daily email newsletter.