Paychex, Inc. (NASDAQ:PAYX) VP Michael E. Gioja sold 50,088 shares of the company’s stock in a transaction dated Friday, January 10th. The stock was sold at an average price of $85.74, for a total value of $4,294,545.12. Following the completion of the sale, the vice president now directly owns 70,023 shares of the company’s stock, valued at approximately $6,003,772.02. The sale was disclosed in a filing with the Securities & Exchange Commission, which is available through the SEC website.

Paychex (NASDAQ:PAYX) last issued its quarterly earnings results on Wednesday, December 18th. The business services provider reported $0.70 EPS for the quarter, beating analysts’ consensus estimates of $0.68 by $0.02. The firm had revenue of $990.70 million during the quarter, compared to the consensus estimate of $988.26 million. Paychex had a return on equity of 41.21% and a net margin of 26.72%. Paychex’s revenue for the quarter was up 15.3% on a year-over-year basis. During the same quarter in the prior year, the business posted $0.65 earnings per share. As a group, research analysts forecast that Paychex, Inc. will post 3.11 earnings per share for the current fiscal year.

Several equities research analysts have recently weighed in on the company. BidaskClub downgraded Paychex from a “sell” rating to a “strong sell” rating in a research report on Friday, December 27th. Robert W. Baird upped their target price on Paychex from $83.00 to $87.00 and gave the stock a “neutral” rating in a research report on Thursday, December 19th. Jefferies Financial Group reissued a “hold” rating and issued a $84.00 price target on shares of Paychex in a report on Wednesday, December 18th. Barclays increased their price target on Paychex from $80.00 to $84.00 and gave the company an “equal weight” rating in a report on Monday, October 7th. Finally, ValuEngine downgraded Paychex from a “buy” rating to a “hold” rating in a report on Wednesday, October 2nd. Four research analysts have rated the stock with a sell rating, six have assigned a hold rating and two have given a buy rating to the company’s stock. Paychex presently has a consensus rating of “Hold” and a consensus price target of $82.71.

Read More: What does an equal weight rating mean? 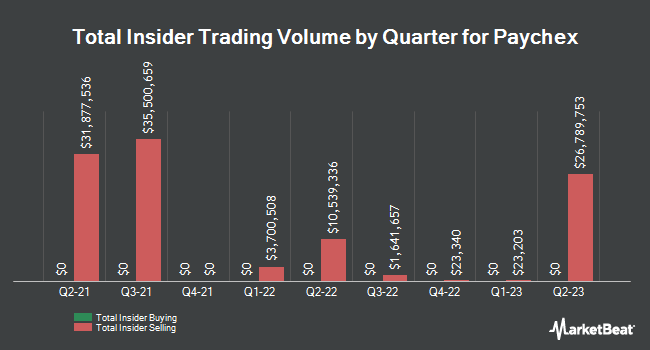 Receive News & Ratings for Paychex Daily - Enter your email address below to receive a concise daily summary of the latest news and analysts' ratings for Paychex and related companies with MarketBeat.com's FREE daily email newsletter.