Alpha Windward LLC reduced its stake in shares of Trueblue Inc (NYSE:TBI) by 3.1% during the fourth quarter, according to the company in its most recent disclosure with the Securities & Exchange Commission. The institutional investor owned 20,820 shares of the business services provider’s stock after selling 660 shares during the quarter. Alpha Windward LLC owned about 0.05% of Trueblue worth $501,000 at the end of the most recent reporting period.

Trueblue (NYSE:TBI) last issued its quarterly earnings results on Monday, October 28th. The business services provider reported $0.76 earnings per share for the quarter, topping the Zacks’ consensus estimate of $0.66 by $0.10. The firm had revenue of $637.00 million for the quarter, compared to analysts’ expectations of $624.63 million. Trueblue had a return on equity of 14.81% and a net margin of 2.85%. Trueblue’s revenue was down 6.3% on a year-over-year basis. During the same quarter last year, the business posted $0.79 EPS. On average, sell-side analysts expect that Trueblue Inc will post 2.04 EPS for the current year.

Recommended Story: What is a death cross? 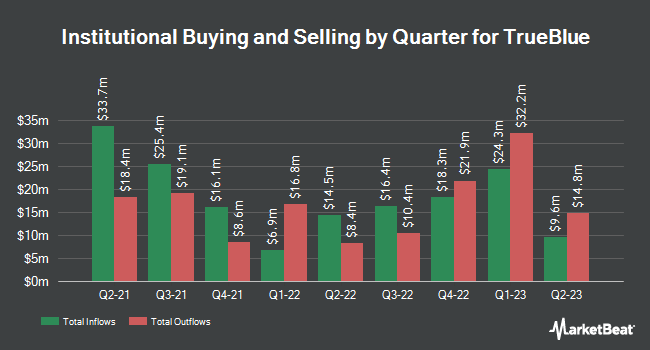 Receive News & Ratings for Trueblue Daily - Enter your email address below to receive a concise daily summary of the latest news and analysts' ratings for Trueblue and related companies with MarketBeat.com's FREE daily email newsletter.