Equities analysts forecast that National-Oilwell Varco, Inc. (NYSE:NOV) will report earnings per share of $0.16 for the current fiscal quarter, according to Zacks Investment Research. Seven analysts have issued estimates for National-Oilwell Varco’s earnings, with the lowest EPS estimate coming in at $0.11 and the highest estimate coming in at $0.19. National-Oilwell Varco posted earnings per share of $0.03 during the same quarter last year, which would suggest a positive year over year growth rate of 433.3%. The company is scheduled to report its next quarterly earnings results after the market closes on Thursday, February 6th.

According to Zacks, analysts expect that National-Oilwell Varco will report full year earnings of $0.19 per share for the current financial year, with EPS estimates ranging from $0.11 to $0.31. For the next fiscal year, analysts expect that the firm will post earnings of $0.76 per share, with EPS estimates ranging from ($0.04) to $1.15. Zacks Investment Research’s EPS averages are an average based on a survey of research analysts that cover National-Oilwell Varco.

National-Oilwell Varco (NYSE:NOV) last announced its quarterly earnings results on Monday, October 28th. The oil and gas exploration company reported ($0.64) EPS for the quarter, missing the consensus estimate of $0.12 by ($0.76). National-Oilwell Varco had a negative net margin of 66.29% and a negative return on equity of 2.82%. The firm had revenue of $2.13 billion during the quarter, compared to analyst estimates of $2.17 billion. The business’s quarterly revenue was down 1.3% compared to the same quarter last year.

The firm also recently announced a quarterly dividend, which was paid on Friday, December 20th. Investors of record on Friday, December 6th were issued a dividend of $0.05 per share. This represents a $0.20 dividend on an annualized basis and a yield of 0.85%. The ex-dividend date was Thursday, December 5th. National-Oilwell Varco’s payout ratio is -250.00%.

In related news, VP Scott K. Duff sold 6,000 shares of the firm’s stock in a transaction that occurred on Wednesday, November 6th. The shares were sold at an average price of $23.51, for a total transaction of $141,060.00. Following the completion of the sale, the vice president now directly owns 42,721 shares in the company, valued at $1,004,370.71. The sale was disclosed in a legal filing with the Securities & Exchange Commission, which is available at this link. Company insiders own 0.92% of the company’s stock. 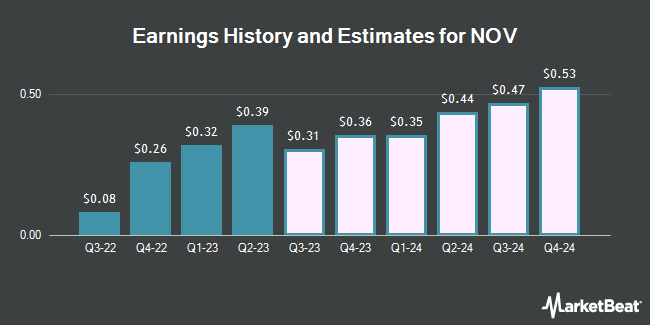