January 22nd, 2020 - By Renee Jackson - Comments Off on PDC Energy (NASDAQ:PDCE) Downgraded by BidaskClub
Filed Under: Analyst Articles - US - Finance

BidaskClub lowered shares of PDC Energy (NASDAQ:PDCE) from a hold rating to a sell rating in a research note released on Saturday morning, BidAskClub reports.

PDC Energy (NASDAQ:PDCE) last released its quarterly earnings data on Wednesday, November 6th. The energy producer reported ($0.39) earnings per share (EPS) for the quarter, missing the consensus estimate of $0.30 by ($0.69). The company had revenue of $365.94 million for the quarter, compared to the consensus estimate of $325.37 million. PDC Energy had a net margin of 8.49% and a negative return on equity of 5.40%. The company’s quarterly revenue was up 30.4% on a year-over-year basis. During the same quarter in the previous year, the business earned $0.48 EPS. As a group, equities analysts expect that PDC Energy will post 0.62 EPS for the current year.

In other news, Director Anthony J. Crisafio sold 3,850 shares of the business’s stock in a transaction on Wednesday, January 15th. The shares were sold at an average price of $24.83, for a total transaction of $95,595.50. Following the completion of the sale, the director now directly owns 18,280 shares of the company’s stock, valued at $453,892.40. The sale was disclosed in a legal filing with the Securities & Exchange Commission, which can be accessed through the SEC website. 1.00% of the stock is currently owned by insiders.

PDC Energy, Inc, an independent exploration and production company, acquires, explores for, develops, and produces crude oil, natural gas, and natural gas liquids in the United States. Its operations are primarily located in the Wattenberg Field in Colorado and the Delaware Basin in Texas. The company was formerly known as Petroleum Development Corporation and changed its name to PDC Energy, Inc in June 2012. 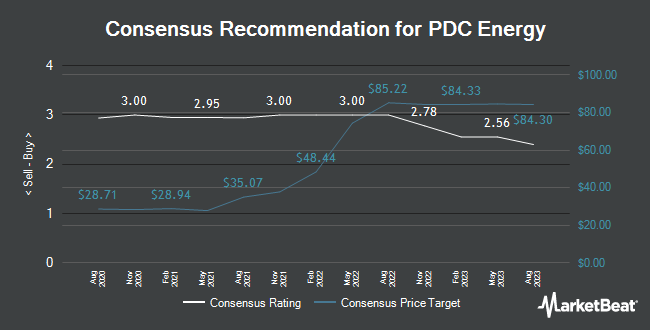