According to Zacks, “Nabriva Therapeutics is a biopharmaceutical company engaged in the research and development of new medicines to treat serious bacterial infections, with a focus on the pleuromutilin class of antibiotics. Nabriva Therapeutics’ medicinal chemistry expertise has enabled targeted discovery of novel pleuromutilins, including both intravenous and oral formulations. Nabriva Therapeutics’ lead product candidate, lefamulin, is a novel semi-synthetic pleuromutilin antibiotic with the potential to be the first-in-class available for systemic administration in humans. The company believes that lefamulin is the first antibiotic with a novel mechanism of action to have reached late-stage clinical development in more than a decade. Nabriva has announced positive topline data for lefamulin from the first of its two global, registrational Phase 3 clinical trials evaluating lefamulin in patients with moderate to severe community-acquired bacterial pneumonia (CABP). “

Nabriva Therapeutics (NASDAQ:NBRV) last announced its quarterly earnings data on Tuesday, November 12th. The biotechnology company reported ($0.24) earnings per share for the quarter, beating the Thomson Reuters’ consensus estimate of ($0.28) by $0.04. The company had revenue of $6.92 million during the quarter, compared to analysts’ expectations of $1.23 million. Nabriva Therapeutics had a negative return on equity of 171.36% and a negative net margin of 910.45%. Sell-side analysts expect that Nabriva Therapeutics will post -1.14 earnings per share for the current fiscal year.

Nabriva Therapeutics plc, a clinical stage biopharmaceutical company, engages in the research and development of anti-infective agents to treat infections in humans. The company focuses on the pleuromutilin class of antibiotics. Its lead product candidate is lefamulin, which is in Phase III clinical trials in intravenous and oral formulations for the treatment of community-acquired bacterial pneumonia; and has completed Phase II clinical trials for the treatment of acute bacterial skin and skin structure infection.

Read More: What is a capital gain? 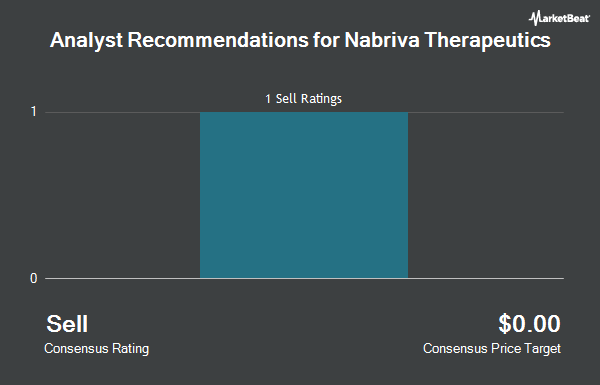