March 26th, 2020 - By Renee Jackson - Comments Off on NorthWestern (NYSE:NWE) Given New $56.00 Price Target at Barclays
Filed Under: Analyst Articles - US - Finance

NorthWestern (NYSE:NWE) had its target price lowered by equities researchers at Barclays from $73.00 to $56.00 in a report issued on Thursday, BenzingaRatingsTable reports. The brokerage presently has an “underweight” rating on the utilities provider’s stock. Barclays‘s target price would indicate a potential downside of 2.74% from the company’s current price.

NorthWestern (NYSE:NWE) last released its quarterly earnings data on Wednesday, February 12th. The utilities provider reported $1.19 EPS for the quarter, hitting analysts’ consensus estimates of $1.19. The firm had revenue of $328.14 million for the quarter, compared to the consensus estimate of $329.22 million. NorthWestern had a net margin of 16.07% and a return on equity of 9.76%. During the same quarter in the previous year, the firm earned $1.07 earnings per share. As a group, equities analysts expect that NorthWestern will post 3.53 EPS for the current year.

Further Reading: What Is An Exchange-Traded Fund (ETF)? 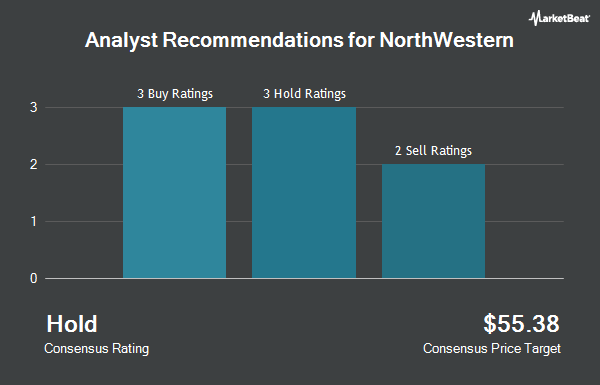