Shares of Occidental Petroleum Co. (NYSE:OXY) have received a consensus recommendation of “Hold” from the twenty-one analysts that are presently covering the company, MarketBeat Ratings reports. Seven research analysts have rated the stock with a sell rating, ten have issued a hold rating, two have given a buy rating and one has given a strong buy rating to the company. The average 1 year price objective among brokers that have issued ratings on the stock in the last year is $23.28.

In other Occidental Petroleum news, SVP Oscar K. Brown bought 5,000 shares of the business’s stock in a transaction on Friday, March 6th. The shares were acquired at an average cost of $27.44 per share, for a total transaction of $137,200.00. Following the purchase, the senior vice president now owns 150,710 shares in the company, valued at approximately $4,135,482.40. The purchase was disclosed in a legal filing with the SEC, which is available through this hyperlink. Also, Director Elisse B. Walter bought 3,758 shares of Occidental Petroleum stock in a transaction on Wednesday, March 4th. The stock was acquired at an average cost of $32.93 per share, with a total value of $123,750.94. Insiders have bought 38,758 shares of company stock valued at $631,351 over the last 90 days. Corporate insiders own 0.21% of the company’s stock.

Occidental Petroleum (NYSE:OXY) last released its earnings results on Tuesday, May 5th. The oil and gas producer reported ($0.52) EPS for the quarter, beating the Thomson Reuters’ consensus estimate of ($0.63) by $0.11. Occidental Petroleum had a negative net margin of 13.85% and a positive return on equity of 1.24%. The company had revenue of $6.45 billion for the quarter, compared to analyst estimates of $5.60 billion. During the same quarter last year, the firm earned $0.84 EPS. The firm’s quarterly revenue was up 57.8% compared to the same quarter last year. Equities analysts anticipate that Occidental Petroleum will post -4.02 EPS for the current year.

Occidental Petroleum Corporation, together with its subsidiaries, engages in the acquisition, exploration, and development of oil and gas properties in the United States and internationally. The company operates through three segments: Oil and Gas, Chemical, and Midstream and Marketing. The Oil and Gas segment explores for, develops, and produces oil and condensate, natural gas liquids (NGLs), and natural gas. 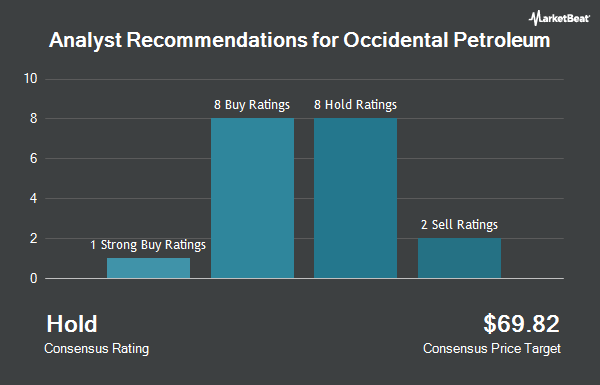