Clearbridge Investments LLC grew its holdings in Covanta Holding Corp (NYSE:CVA) by 68.2% during the 1st quarter, according to its most recent filing with the Securities and Exchange Commission (SEC). The fund owned 118,720 shares of the energy company’s stock after acquiring an additional 48,124 shares during the period. Clearbridge Investments LLC owned about 0.09% of Covanta worth $1,015,000 at the end of the most recent quarter.

In other news, Director Ronald J. Broglio sold 6,000 shares of the stock in a transaction dated Tuesday, June 9th. The shares were sold at an average price of $9.78, for a total value of $58,680.00. Following the completion of the sale, the director now directly owns 13,567 shares in the company, valued at $132,685.26. The sale was disclosed in a document filed with the Securities & Exchange Commission, which is available through this link. 11.10% of the stock is owned by corporate insiders.

Covanta (NYSE:CVA) last issued its earnings results on Thursday, May 7th. The energy company reported ($0.24) EPS for the quarter, missing the Zacks’ consensus estimate of ($0.22) by ($0.02). The business had revenue of $468.00 million during the quarter, compared to analyst estimates of $458.18 million. Covanta had a negative net margin of 1.43% and a negative return on equity of 7.34%. Covanta’s quarterly revenue was up 3.3% on a year-over-year basis. During the same quarter last year, the company earned $0.03 earnings per share. Equities research analysts expect that Covanta Holding Corp will post -0.37 EPS for the current year.

The firm also recently announced a quarterly dividend, which will be paid on Friday, July 10th. Stockholders of record on Friday, June 26th will be given a $0.08 dividend. This represents a $0.32 dividend on an annualized basis and a dividend yield of 3.52%. The ex-dividend date of this dividend is Thursday, June 25th. Covanta’s dividend payout ratio (DPR) is 457.14%.

Covanta Holding Corporation, through its subsidiaries, provides waste and energy services to municipal entities primarily in the United States and Canada. It owns and operates infrastructure for the conversion of waste to energy, as well as engages in related waste transport and disposal, and other renewable energy production businesses. 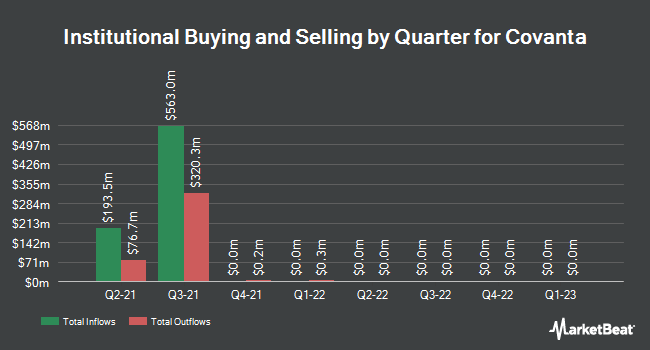 Receive News & Ratings for Covanta Daily - Enter your email address below to receive a concise daily summary of the latest news and analysts' ratings for Covanta and related companies with MarketBeat.com's FREE daily email newsletter.