Cardinal Energy (TSE:CJ) had its price target decreased by equities research analysts at BMO Capital Markets from C$1.00 to C$0.75 in a report released on Monday, BayStreet.CA reports. BMO Capital Markets’ target price points to a potential upside of 41.51% from the stock’s current price.

Cardinal Energy (TSE:CJ) last issued its earnings results on Thursday, May 7th. The company reported C($0.95) earnings per share for the quarter, missing the Thomson Reuters’ consensus estimate of C($0.05) by C($0.90). The firm had revenue of C$63.47 million during the quarter. Research analysts expect that Cardinal Energy will post -0.44 EPS for the current fiscal year.

Cardinal Energy Ltd. engages in the acquisition, exploration, and production of petroleum and natural gas in the provinces of Alberta and Saskatchewan, Canada. It holds interests in the Midale, Wainwright, Mitsue, Bantry, and Grande Prairie properties. The company was incorporated in 2010 and is headquartered in Calgary, Canada.

Read More: What is a Tariff? 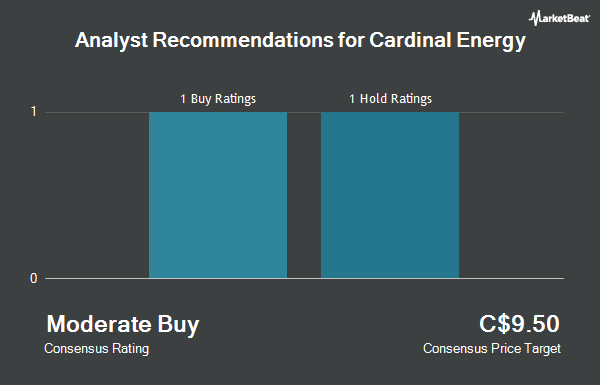