D. R. Horton Inc (NYSE:DHI) Director Michael W. Hewatt sold 1,000 shares of the firm’s stock in a transaction that occurred on Thursday, June 25th. The shares were sold at an average price of $53.45, for a total value of $53,450.00. Following the completion of the sale, the director now directly owns 1,000 shares of the company’s stock, valued at approximately $53,450. The sale was disclosed in a document filed with the Securities & Exchange Commission, which is accessible through the SEC website.

D. R. Horton (NYSE:DHI) last issued its earnings results on Tuesday, April 28th. The construction company reported $1.30 earnings per share for the quarter, topping analysts’ consensus estimates of $1.12 by $0.18. The firm had revenue of $4.50 billion during the quarter, compared to analyst estimates of $4.48 billion. D. R. Horton had a net margin of 10.26% and a return on equity of 17.70%. The company’s quarterly revenue was up 9.0% on a year-over-year basis. During the same quarter last year, the business earned $0.93 earnings per share. Analysts anticipate that D. R. Horton Inc will post 4.45 earnings per share for the current fiscal year.

D.R. Horton, Inc operates as a homebuilding company in East, Midwest, Southeast, South Central, Southwest, and West regions in the United States. It engages in the acquisition and development of land; and construction and sale of homes in 27 states and 81 markets in the United States under the names of D.R. 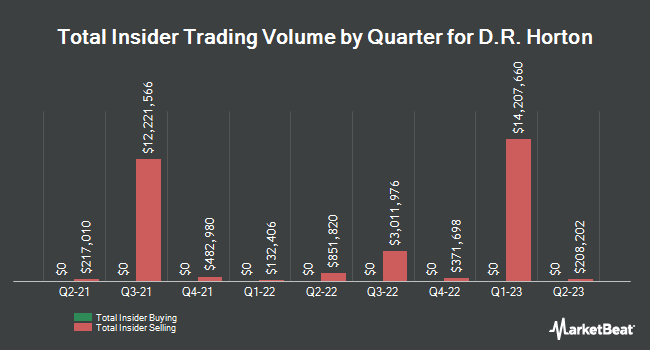