A number of research firms recently issued reports on WAFD. BidaskClub upgraded shares of Washington Federal from a “strong sell” rating to a “sell” rating in a research note on Wednesday, August 12th. Piper Sandler raised their target price on shares of Washington Federal from $25.00 to $25.50 and gave the company a “neutral” rating in a research note on Monday, July 27th. Finally, Zacks Investment Research upgraded shares of Washington Federal from a “sell” rating to a “hold” rating and set a $24.00 target price on the stock in a research note on Thursday, September 10th. One research analyst has rated the stock with a sell rating and four have issued a hold rating to the stock. The stock has a consensus rating of “Hold” and an average target price of $28.50.

The business also recently declared a quarterly dividend, which was paid on Friday, August 21st. Shareholders of record on Friday, August 7th were given a $0.22 dividend. The ex-dividend date was Thursday, August 6th. This represents a $0.88 annualized dividend and a yield of 3.88%. Washington Federal’s dividend payout ratio is 33.72%.

In related news, Director Randall H. Talbot purchased 5,300 shares of the firm’s stock in a transaction on Tuesday, July 28th. The shares were bought at an average cost of $23.16 per share, for a total transaction of $122,748.00. Following the transaction, the director now directly owns 39,743 shares of the company’s stock, valued at approximately $920,447.88. The transaction was disclosed in a filing with the SEC, which is accessible through this hyperlink. Insiders acquired a total of 7,378 shares of company stock worth $171,336 over the last 90 days. Company insiders own 1.21% of the company’s stock.

Washington Federal, Inc operates as the bank holding company for Washington Federal, National Association that provides lending, depository, insurance, and other banking services in the United States. The company accepts deposit products, including business and personal checking accounts, and term certificates of deposit, as well as money market accounts and passbook savings accounts.

Want to see what other hedge funds are holding WAFD? Visit HoldingsChannel.com to get the latest 13F filings and insider trades for Washington Federal Inc. (NASDAQ:WAFD). 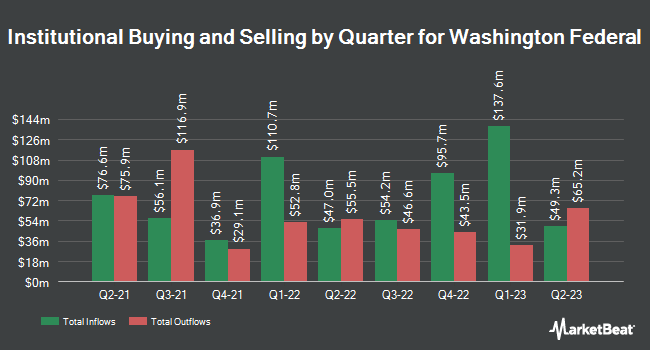