UBS Group AG lowered its stake in shares of Telenav Inc (NASDAQ:TNAV) by 41.2% during the 2nd quarter, HoldingsChannel.com reports. The institutional investor owned 13,681 shares of the technology company’s stock after selling 9,578 shares during the period. UBS Group AG’s holdings in Telenav were worth $75,000 at the end of the most recent reporting period.

Telenav (NASDAQ:TNAV) last announced its earnings results on Wednesday, August 12th. The technology company reported ($0.20) earnings per share for the quarter, missing analysts’ consensus estimates of ($0.17) by ($0.03). The company had revenue of $35.35 million for the quarter, compared to the consensus estimate of $48.65 million. Telenav had a negative net margin of 4.16% and a negative return on equity of 5.57%. As a group, sell-side analysts expect that Telenav Inc will post -0.06 earnings per share for the current fiscal year.

Telenav, Inc, together with its subsidiaries provides connected car and location-based platform services in the United States and internationally. The company operates through three segments: Automotive, Advertising, and Mobile Navigation. It offers automotive navigation services, including on-board solutions, which consist of software, map, and points of interest data loaded in vehicles that provide voice-guided turn by turn navigation displayed on the vehicle screen; and brought-in navigation services.

Read More: What is a back-end load?

Want to see what other hedge funds are holding TNAV? Visit HoldingsChannel.com to get the latest 13F filings and insider trades for Telenav Inc (NASDAQ:TNAV). 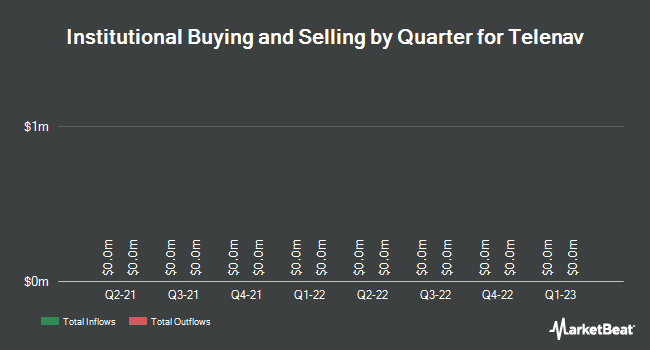 Receive News & Ratings for Telenav Daily - Enter your email address below to receive a concise daily summary of the latest news and analysts' ratings for Telenav and related companies with MarketBeat.com's FREE daily email newsletter.