Berenberg Bank cut shares of Appian (NASDAQ:APPN) from a buy rating to a hold rating in a research report released on Thursday morning, Anlyst Ratings reports.

Appian (NASDAQ:APPN) last issued its quarterly earnings data on Thursday, August 6th. The company reported ($0.12) earnings per share (EPS) for the quarter, topping the Thomson Reuters’ consensus estimate of ($0.25) by $0.13. Appian had a negative return on equity of 21.85% and a negative net margin of 16.47%. The firm had revenue of $66.78 million during the quarter, compared to the consensus estimate of $61.24 million. During the same period in the previous year, the firm posted ($0.11) EPS. The company’s quarterly revenue was up 2.3% compared to the same quarter last year. As a group, research analysts expect that Appian will post -0.75 EPS for the current fiscal year.

Appian Corporation provides low-code software development platform that enables organizations to develop various applications in the United States and internationally. The company's platform automates the creation of forms, data flows, records, reports, and other software elements that are needed to be manually coded or configured.

Read More: What is the Difference Between Common Shares and Convertible Shares? 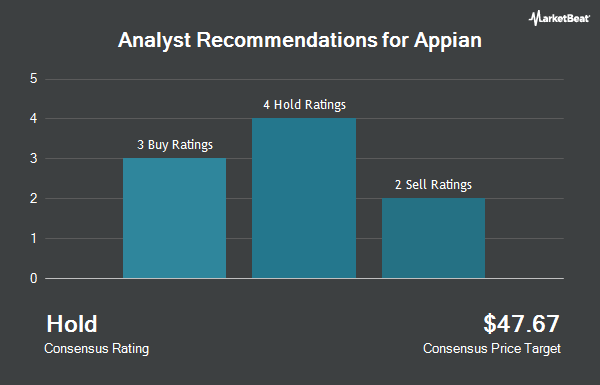 Receive News & Ratings for Appian Daily - Enter your email address below to receive a concise daily summary of the latest news and analysts' ratings for Appian and related companies with MarketBeat.com's FREE daily email newsletter.