Evolution Wealth Advisors LLC lowered its holdings in shares of Slack Technologies, Inc. (NYSE:WORK) by 59.8% in the third quarter, according to the company in its most recent Form 13F filing with the Securities and Exchange Commission. The fund owned 2,000 shares of the company’s stock after selling 2,970 shares during the period. Evolution Wealth Advisors LLC’s holdings in Slack Technologies were worth $54,000 at the end of the most recent reporting period.

Slack Technologies (NYSE:WORK) last posted its quarterly earnings data on Tuesday, September 8th. The company reported ($0.11) earnings per share for the quarter, beating the Thomson Reuters’ consensus estimate of ($0.14) by $0.03. The company had revenue of $215.90 million during the quarter, compared to analyst estimates of $209.22 million. Slack Technologies had a negative net margin of 42.73% and a negative return on equity of 39.14%. The business’s revenue for the quarter was up 48.9% on a year-over-year basis. During the same quarter last year, the firm posted ($0.14) EPS. On average, equities analysts expect that Slack Technologies, Inc. will post -0.55 EPS for the current year.

Slack Technologies, Inc operates Slack, a business technology software platform in the United States and internationally. Its platform brings together people, applications, and data, as well as sells its offering under a software-as-a-service model. The company was formerly known as Tiny Speck, Inc and changed its name to Slack Technologies, Inc in 2014. 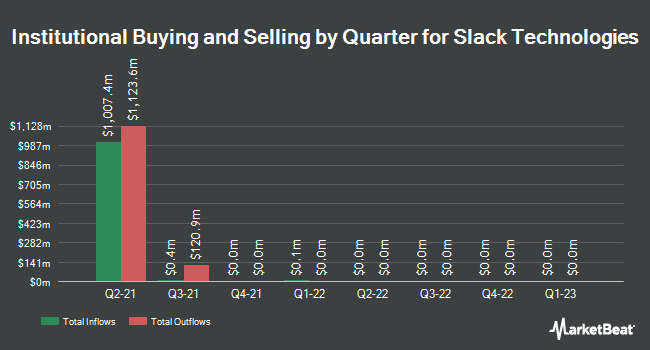