Chase Co. (NYSEAMERICAN:CCF) Director Mary Claire Chase sold 589 shares of Chase stock in a transaction that occurred on Tuesday, January 12th. The stock was sold at an average price of $113.00, for a total transaction of $66,557.00. Following the completion of the transaction, the director now directly owns 6,870 shares in the company, valued at $776,310. The transaction was disclosed in a document filed with the Securities & Exchange Commission, which is available through this link.

Chase (NYSEAMERICAN:CCF) last released its earnings results on Thursday, November 12th. The construction company reported $0.83 earnings per share for the quarter. The business had revenue of $63.91 million for the quarter. Chase had a net margin of 14.39% and a return on equity of 12.21%.

Separately, BidaskClub downgraded shares of Chase from a “buy” rating to a “hold” rating in a research report on Friday, December 18th. 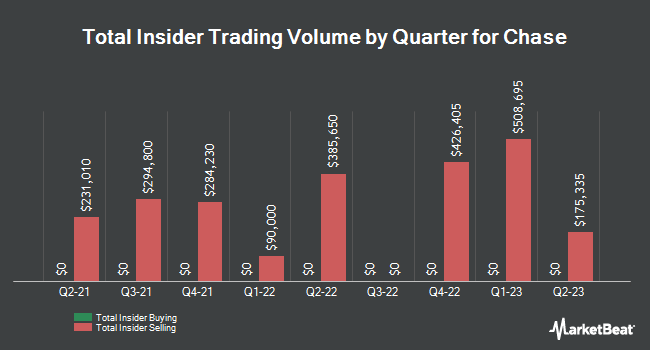 Receive News & Ratings for Chase Daily - Enter your email address below to receive a concise daily summary of the latest news and analysts' ratings for Chase and related companies with MarketBeat.com's FREE daily email newsletter.