Heska (NASDAQ:HSKA) had its price target lifted by research analysts at Piper Sandler from $157.00 to $220.00 in a report issued on Tuesday, The Fly reports. The firm currently has an “overweight” rating on the medical research company’s stock. Piper Sandler’s price objective would suggest a potential upside of 11.94% from the company’s previous close.

Other research analysts also recently issued research reports about the stock. JPMorgan Chase & Co. began coverage on shares of Heska in a research report on Friday, January 29th. They issued an “overweight” rating and a $195.00 price objective for the company. Raymond James increased their price objective on shares of Heska from $140.00 to $145.00 and gave the company an “outperform” rating in a report on Thursday, November 19th. TheStreet upgraded Heska from a “d+” rating to a “c-” rating in a research note on Tuesday, October 27th. Alliance Global Partners boosted their price objective on Heska from $116.50 to $163.50 and gave the company a “buy” rating in a report on Wednesday, November 4th. Finally, Zacks Investment Research downgraded Heska from a “hold” rating to a “sell” rating in a report on Wednesday, February 17th. One investment analyst has rated the stock with a sell rating, one has assigned a hold rating and four have issued a buy rating to the stock. The company currently has a consensus rating of “Buy” and a consensus price target of $143.92.

In other news, EVP Jason D. Aroesty sold 13,334 shares of the stock in a transaction that occurred on Friday, November 27th. The stock was sold at an average price of $126.86, for a total transaction of $1,691,551.24. Following the completion of the transaction, the executive vice president now directly owns 11,460 shares in the company, valued at approximately $1,453,815.60. The transaction was disclosed in a document filed with the SEC, which is accessible through this link. 11.70% of the stock is owned by company insiders. 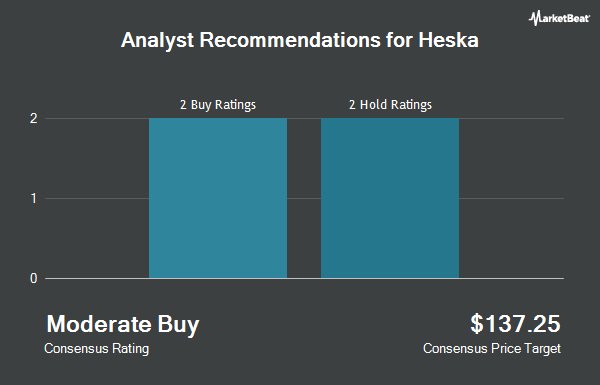