Wall Street analysts expect that Stanley Black & Decker, Inc. (NYSE:SWK) will post earnings of $2.51 per share for the current fiscal quarter, according to Zacks Investment Research. Six analysts have provided estimates for Stanley Black & Decker’s earnings, with the highest EPS estimate coming in at $2.65 and the lowest estimate coming in at $2.39. Stanley Black & Decker posted earnings per share of $1.20 in the same quarter last year, which would indicate a positive year-over-year growth rate of 109.2%. The business is scheduled to issue its next quarterly earnings report before the market opens on Wednesday, April 28th.

According to Zacks, analysts expect that Stanley Black & Decker will report full-year earnings of $10.23 per share for the current financial year, with EPS estimates ranging from $10.05 to $10.60. For the next financial year, analysts forecast that the company will post earnings of $11.21 per share, with EPS estimates ranging from $10.55 to $12.23. Zacks’ EPS averages are a mean average based on a survey of analysts that that provide coverage for Stanley Black & Decker.

Stanley Black & Decker (NYSE:SWK) last issued its quarterly earnings data on Wednesday, January 27th. The industrial products company reported $3.29 earnings per share (EPS) for the quarter, topping analysts’ consensus estimates of $2.98 by $0.31. The business had revenue of $4.41 billion during the quarter, compared to analyst estimates of $4.10 billion. Stanley Black & Decker had a return on equity of 15.05% and a net margin of 6.98%. The business’s revenue for the quarter was up 18.7% compared to the same quarter last year. During the same period in the prior year, the company posted $2.18 EPS.

In other Stanley Black & Decker news, EVP Jeffrey D. Ansell sold 3,304 shares of the stock in a transaction on Wednesday, March 17th. The shares were sold at an average price of $190.53, for a total transaction of $629,511.12. Following the transaction, the executive vice president now directly owns 25,090 shares of the company’s stock, valued at $4,780,397.70. The transaction was disclosed in a document filed with the Securities & Exchange Commission, which is available at this link. Corporate insiders own 1.00% of the company’s stock.

The firm also recently announced a quarterly dividend, which was paid on Tuesday, March 23rd. Shareholders of record on Tuesday, March 9th were given a dividend of $0.70 per share. This represents a $2.80 annualized dividend and a yield of 1.40%. The ex-dividend date of this dividend was Monday, March 8th. Stanley Black & Decker’s payout ratio is 33.33%.

Stanley Black & Decker, Inc engages in the tools and storage, industrial, and security businesses worldwide. Its Tools & Storage segment offers power tools and equipment, including professional products, such as professional grade corded and cordless electric power tools and equipment, and pneumatic tools and fasteners; and consumer products comprising corded and cordless electric power tools primarily under the BLACK+DECKER brand, as well as lawn and garden products and related accessories, and home products. 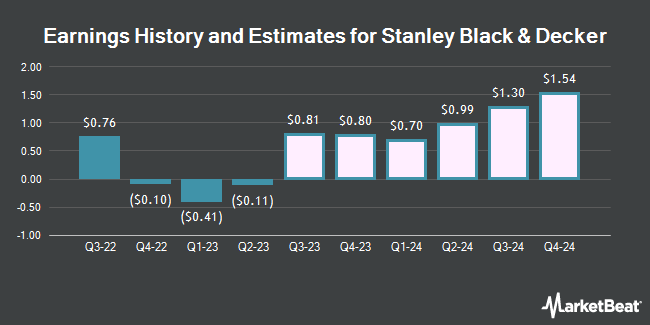