Capital Asset Advisory Services LLC purchased a new stake in Hubbell Incorporated (NYSE:HUBB) during the 4th quarter, according to its most recent disclosure with the Securities and Exchange Commission (SEC). The institutional investor purchased 738 shares of the industrial products company’s stock, valued at approximately $116,000.

A number of research analysts have weighed in on the stock. Morgan Stanley upped their price objective on shares of Hubbell from $178.00 to $180.00 and gave the stock an “equal weight” rating in a research report on Wednesday, February 3rd. Zacks Investment Research upgraded shares of Hubbell from a “hold” rating to a “buy” rating and set a $196.00 price objective for the company in a research report on Friday, March 5th. Two equities research analysts have rated the stock with a hold rating and five have given a buy rating to the stock. The company currently has a consensus rating of “Buy” and an average target price of $165.17.

Hubbell (NYSE:HUBB) last released its quarterly earnings results on Monday, February 1st. The industrial products company reported $1.76 earnings per share for the quarter, missing the consensus estimate of $1.77 by ($0.01). Hubbell had a return on equity of 21.38% and a net margin of 8.75%. The company had revenue of $1.04 billion for the quarter, compared to analyst estimates of $1.06 billion. During the same quarter last year, the company earned $1.91 EPS. The firm’s revenue for the quarter was down 5.9% on a year-over-year basis. As a group, sell-side analysts expect that Hubbell Incorporated will post 7.57 earnings per share for the current year.

The business also recently declared a quarterly dividend, which was paid on Monday, March 15th. Investors of record on Friday, February 26th were given a dividend of $0.98 per share. The ex-dividend date was Thursday, February 25th. This represents a $3.92 annualized dividend and a dividend yield of 2.09%. Hubbell’s dividend payout ratio (DPR) is presently 48.28%.

Hubbell Incorporated, together with its subsidiaries, designs, manufactures, and sells electrical and electronic products in the United States and internationally. The company operates through two segments, Electrical Solution and Utility Solution. The Electrical Solution segment offers standard and special application wiring device products, rough-in electrical products, connector and grounding products, lighting fixtures and controls, and other electrical equipment for use in industrial, commercial, and institutional facilities by electrical contractors, maintenance personnel, electricians, utilities, and telecommunications companies, as well as components and assemblies for the natural gas distribution market.

Read More: What is an inverted yield curve? 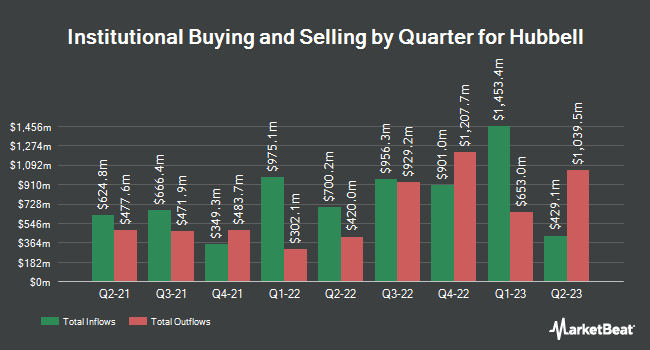 Receive News & Ratings for Hubbell Daily - Enter your email address below to receive a concise daily summary of the latest news and analysts' ratings for Hubbell and related companies with MarketBeat.com's FREE daily email newsletter.