Principal Financial Group Inc. lowered its stake in Crocs, Inc. (NASDAQ:CROX) by 2.8% during the 4th quarter, according to its most recent disclosure with the Securities & Exchange Commission. The firm owned 491,381 shares of the textile maker’s stock after selling 13,969 shares during the quarter. Principal Financial Group Inc. owned about 0.73% of Crocs worth $30,790,000 as of its most recent filing with the Securities & Exchange Commission.

Crocs (NASDAQ:CROX) last released its quarterly earnings results on Monday, February 22nd. The textile maker reported $1.06 EPS for the quarter, topping the Thomson Reuters’ consensus estimate of $0.79 by $0.27. The firm had revenue of $411.50 million during the quarter, compared to analyst estimates of $408.71 million. Crocs had a return on equity of 102.93% and a net margin of 12.08%. The business’s revenue for the quarter was up 56.5% compared to the same quarter last year. During the same period in the previous year, the company posted $0.12 EPS. On average, research analysts expect that Crocs, Inc. will post 2.93 earnings per share for the current year. 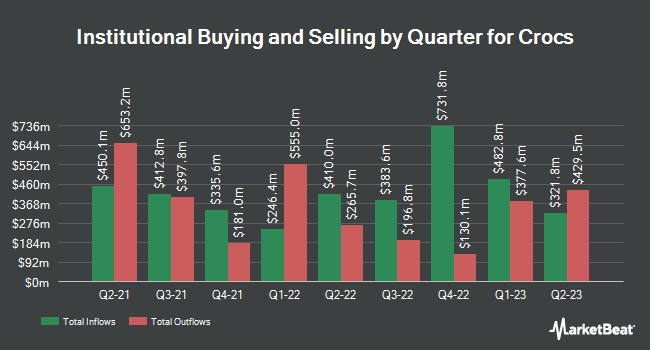 Receive News & Ratings for Crocs Daily - Enter your email address below to receive a concise daily summary of the latest news and analysts' ratings for Crocs and related companies with MarketBeat.com's FREE daily email newsletter.