United Fire Group (NASDAQ:UFCS) last released its earnings results on Tuesday, February 16th. The insurance provider reported ($1.30) earnings per share for the quarter, topping analysts’ consensus estimates of ($1.31) by $0.01. United Fire Group had a negative return on equity of 7.65% and a negative net margin of 12.08%. The company had revenue of $280.88 million during the quarter, compared to the consensus estimate of $267.50 million.

In other United Fire Group news, Director Scott L. Carlton sold 1,150 shares of the business’s stock in a transaction dated Monday, February 22nd. The stock was sold at an average price of $29.53, for a total value of $33,959.50. Following the completion of the transaction, the director now directly owns 88,298 shares of the company’s stock, valued at $2,607,439.94. The transaction was disclosed in a legal filing with the SEC, which can be accessed through this hyperlink. 6.89% of the stock is currently owned by insiders.

The firm also recently announced a quarterly dividend, which was paid on Friday, March 19th. Shareholders of record on Friday, March 5th were paid a $0.15 dividend. The ex-dividend date was Thursday, March 4th. This represents a $0.60 dividend on an annualized basis and a yield of 1.75%. United Fire Group’s payout ratio is -55.56%.

United Fire Group, Inc, together with its subsidiaries, provides property and casualty insurance for individuals and businesses in the United States. The company offers commercial and personal lines of property and casualty insurance, as well as assumed reinsurance products. Its commercial policies include fire and allied lines, other liability, automobile, workers' compensation, and surety coverage; and personal lines comprise automobile, and fire and allied lines coverage, including homeowners. 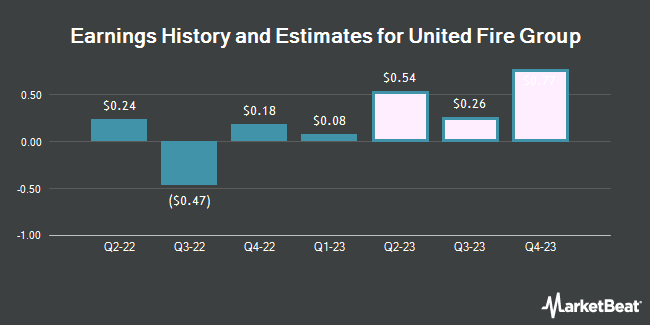