Everbridge, Inc. (NASDAQ:EVBG) has been given a consensus rating of “Buy” by the nine research firms that are covering the firm, MarketBeat.com reports. One research analyst has rated the stock with a sell recommendation, two have issued a hold recommendation and five have given a buy recommendation to the company. The average 12 month target price among brokerages that have covered the stock in the last year is $166.88.

Everbridge (NASDAQ:EVBG) last announced its quarterly earnings data on Monday, May 10th. The technology company reported $0.18 EPS for the quarter, topping analysts’ consensus estimates of ($0.11) by $0.29. The business had revenue of $82.20 million during the quarter, compared to analysts’ expectations of $75.61 million. Everbridge had a negative return on equity of 13.18% and a negative net margin of 30.50%. The firm’s quarterly revenue was up 39.6% compared to the same quarter last year. During the same period in the previous year, the firm earned ($0.16) earnings per share. As a group, research analysts predict that Everbridge will post -1.92 earnings per share for the current fiscal year.

In other Everbridge news, CFO Patrick Brickley sold 13,548 shares of the business’s stock in a transaction that occurred on Tuesday, May 11th. The stock was sold at an average price of $112.90, for a total transaction of $1,529,569.20. Following the transaction, the chief financial officer now owns 31,880 shares of the company’s stock, valued at $3,599,252. The sale was disclosed in a document filed with the SEC, which is available through this link. 0.44% of the stock is owned by insiders.

Everbridge, Inc operates as a software company in the United States and internationally. The company's Critical Event Management, a software as a service based platform with various software applications that address tasks an organization has to perform to manage a critical event, including Mass Notification that enables enterprises and governmental entities to send notifications to individuals or groups to keep them informed before, during, and after natural or man-made disasters, and other emergencies; Safety Connection that enables organizations to send notifications based on last known location of an individual; Incident Management that enables organizations to automate workflows and make their communications relevant; and IT Alerting that enables IT professionals to alert and communicate with members of their teams during an IT incident or outage. 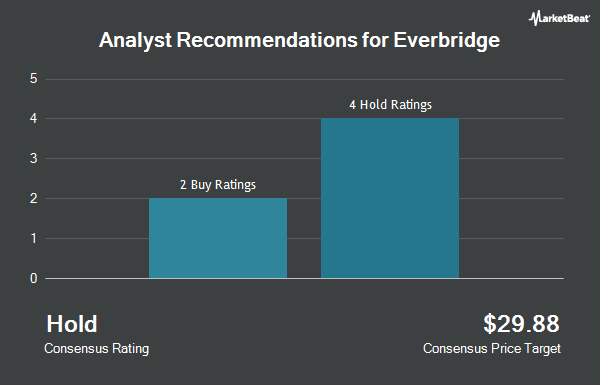 Complete the form below to receive the latest headlines and analysts' recommendations for Everbridge with our free daily email newsletter: