Carnival Co. & (NYSE:CCL) had its target price raised by equities research analysts at Argus from $33.00 to $35.00 in a research note issued to investors on Friday, The Fly reports. The brokerage presently has a “buy” rating on the stock. Argus’ price target would indicate a potential upside of 17.33% from the company’s previous close.

Carnival Co. & (NYSE:CCL) last posted its earnings results on Tuesday, April 6th. The company reported ($1.79) earnings per share for the quarter, missing the Thomson Reuters’ consensus estimate of ($1.54) by ($0.25). Carnival Co. & had a negative net margin of 1,375.09% and a negative return on equity of 39.14%. The business had revenue of $26.00 million for the quarter, compared to analysts’ expectations of $108.00 million. As a group, equities analysts forecast that Carnival Co. & will post -5.48 EPS for the current fiscal year. 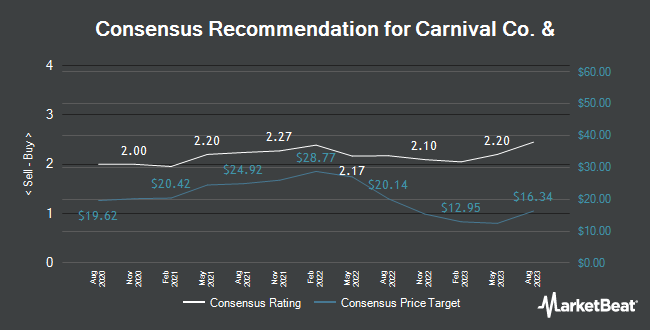 Complete the form below to receive the latest headlines and analysts' recommendations for Carnival Co. & with our free daily email newsletter: