Owl Rock Capital Co. (NYSE:ORCC) major shareholder Of The University Of C. Regents sold 102,619 shares of the business’s stock in a transaction dated Wednesday, June 9th. The shares were sold at an average price of $14.74, for a total transaction of $1,512,604.06. Following the completion of the sale, the insider now directly owns 39,625,210 shares of the company’s stock, valued at approximately $584,075,595.40. The sale was disclosed in a legal filing with the Securities & Exchange Commission, which is accessible through the SEC website. Large shareholders that own more than 10% of a company’s stock are required to disclose their sales and purchases with the SEC.

Of The University Of C. Regents also recently made the following trade(s):

Owl Rock Capital (NYSE:ORCC) last issued its earnings results on Wednesday, May 5th. The technology company reported $0.26 EPS for the quarter, missing the Thomson Reuters’ consensus estimate of $0.29 by ($0.03). The business had revenue of $221.57 million for the quarter, compared to analyst estimates of $231.03 million. Owl Rock Capital had a return on equity of 8.30% and a net margin of 104.64%. As a group, equities research analysts forecast that Owl Rock Capital Co. will post 1.21 EPS for the current year.

The firm also recently announced a quarterly dividend, which will be paid on Friday, August 13th. Shareholders of record on Wednesday, June 30th will be paid a dividend of $0.31 per share. This represents a $1.24 annualized dividend and a yield of 8.45%. The ex-dividend date is Tuesday, June 29th. Owl Rock Capital’s payout ratio is 93.23%.

A number of equities research analysts have recently issued reports on the stock. Oppenheimer assumed coverage on shares of Owl Rock Capital in a research report on Wednesday, March 31st. They issued an “outperform” rating and a $15.00 target price for the company. Janney Montgomery Scott raised Owl Rock Capital from a “neutral” rating to a “buy” rating and set a $15.00 price target for the company in a research note on Wednesday, February 24th. Finally, Royal Bank of Canada raised Owl Rock Capital from a “sector perform” rating to an “outperform” rating and boosted their price target for the company from $13.50 to $15.00 in a research note on Friday, February 26th. One analyst has rated the stock with a hold rating and eight have assigned a buy rating to the company. The stock currently has an average rating of “Buy” and an average price target of $14.43.

Owl Rock Capital Corporation is a business development company. The fund makes investments in senior secured or unsecured loans, subordinated loans or mezzanine loans and also considers equity-related securities including warrants and preferred stocks. It seeks to invest in middle market companies based in the United States, with EBITDA between $10 million and $250 million annually and/or annual revenue of $50 million and $2.5 billion at the time of investment.

See Also: What does a bar chart display? 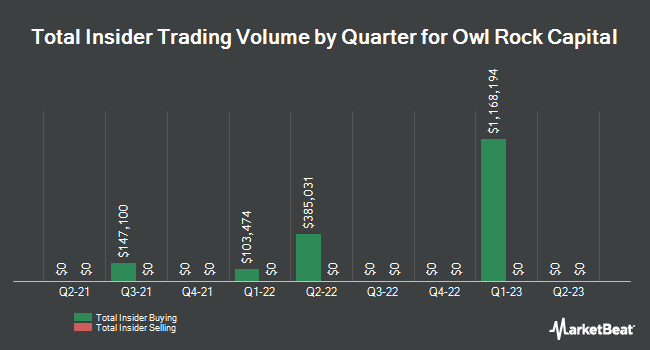 Complete the form below to receive the latest headlines and analysts' recommendations for Owl Rock Capital with our free daily email newsletter: