UBS Group AG lowered its stake in shares of Gray Television, Inc. (NYSE:GTN) by 1.1% during the 1st quarter, according to its most recent disclosure with the Securities and Exchange Commission (SEC). The firm owned 3,748,524 shares of the company’s stock after selling 41,994 shares during the quarter. UBS Group AG’s holdings in Gray Television were worth $68,973,000 as of its most recent filing with the Securities and Exchange Commission (SEC).

The company also recently announced a quarterly dividend, which will be paid on Wednesday, June 30th. Stockholders of record on Tuesday, June 15th will be paid a $0.08 dividend. The ex-dividend date of this dividend is Monday, June 14th. This represents a $0.32 annualized dividend and a dividend yield of 1.40%. Gray Television’s dividend payout ratio is presently 8.67%.

GTN has been the topic of several research analyst reports. Barrington Research boosted their price target on shares of Gray Television from $23.00 to $25.00 and gave the company an “outperform” rating in a research report on Monday, May 10th. Zacks Investment Research lowered shares of Gray Television from a “buy” rating to a “hold” rating in a research note on Tuesday. One equities research analyst has rated the stock with a hold rating and three have given a buy rating to the company. Gray Television currently has an average rating of “Buy” and an average target price of $25.00.

Featured Story: How is diluted EPS different from basic EPS?

Want to see what other hedge funds are holding GTN? Visit HoldingsChannel.com to get the latest 13F filings and insider trades for Gray Television, Inc. (NYSE:GTN). 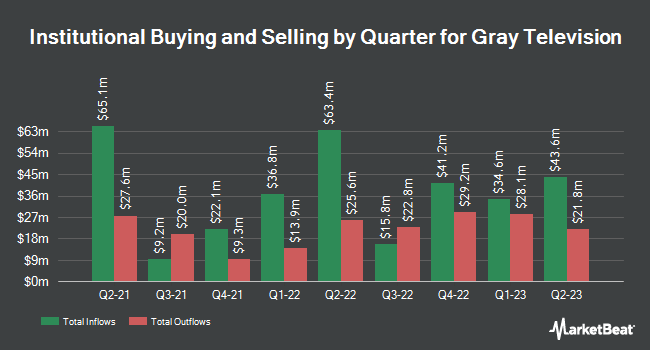 Complete the form below to receive the latest headlines and analysts' recommendations for Gray Television with our free daily email newsletter: