Potrero Capital Research LLC purchased a new stake in Bally’s Co. (NYSE:BALY) during the 1st quarter, according to the company in its most recent 13F filing with the SEC. The fund purchased 63,640 shares of the company’s stock, valued at approximately $4,135,000. Potrero Capital Research LLC owned 0.15% of Bally’s as of its most recent SEC filing.

Bally’s (NYSE:BALY) last posted its quarterly earnings results on Sunday, May 9th. The company reported $0.28 earnings per share (EPS) for the quarter, missing the Thomson Reuters’ consensus estimate of $0.40 by ($0.12). The business had revenue of $192.30 million during the quarter, compared to analyst estimates of $156.56 million. Bally’s had a positive return on equity of 3.32% and a negative net margin of 1.60%. The business’s revenue for the quarter was up 76.3% compared to the same quarter last year. As a group, sell-side analysts predict that Bally’s Co. will post 1.85 EPS for the current fiscal year.

A number of research firms have recently commented on BALY. KeyCorp increased their price target on Bally’s from $65.00 to $70.00 and gave the company an “overweight” rating in a report on Thursday, April 8th. Stifel Nicolaus raised their target price on Bally’s from $75.00 to $81.00 and gave the company a “buy” rating in a research note on Monday, June 28th. Jefferies Financial Group began coverage on Bally’s in a research note on Wednesday, April 21st. They set a “buy” rating and a $66.00 target price for the company. Finally, Zacks Investment Research downgraded Bally’s from a “hold” rating to a “sell” rating in a research note on Tuesday, July 13th. One analyst has rated the stock with a sell rating and four have issued a buy rating to the company’s stock. Bally’s has an average rating of “Buy” and an average target price of $71.60.

Further Reading: What is the definition of a trade war? 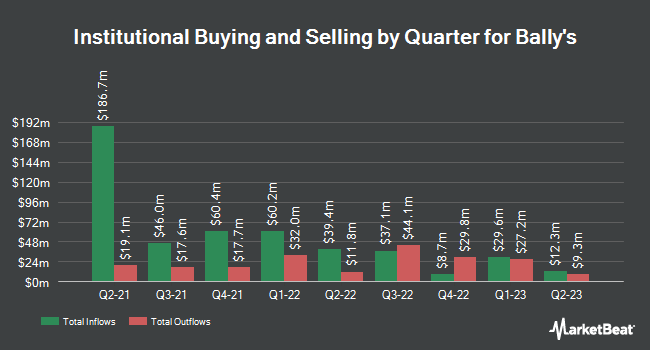 Receive News & Ratings for Bally's Daily - Enter your email address below to receive a concise daily summary of the latest news and analysts' ratings for Bally's and related companies with MarketBeat.com's FREE daily email newsletter.

Complete the form below to receive the latest headlines and analysts' recommendations for Bally's with our free daily email newsletter: