Wingstop Inc. (NASDAQ:WING) has been given an average recommendation of “Buy” by the twenty-one analysts that are presently covering the stock, MarketBeat.com reports. Six equities research analysts have rated the stock with a hold rating and fifteen have issued a buy rating on the company. The average 12-month price target among brokers that have updated their coverage on the stock in the last year is $173.25.

Wingstop (NASDAQ:WING) last announced its quarterly earnings data on Wednesday, July 28th. The restaurant operator reported $0.38 earnings per share for the quarter, beating the Thomson Reuters’ consensus estimate of $0.33 by $0.05. Wingstop had a net margin of 10.35% and a negative return on equity of 13.51%. The business had revenue of $74.00 million for the quarter, compared to analyst estimates of $73.38 million. Equities research analysts anticipate that Wingstop will post 1.49 earnings per share for the current year.

The business also recently disclosed a quarterly dividend, which was paid on Friday, September 3rd. Stockholders of record on Friday, August 13th were given a dividend of $0.17 per share. This is an increase from Wingstop’s previous quarterly dividend of $0.14. The ex-dividend date of this dividend was Thursday, August 12th. This represents a $0.68 annualized dividend and a dividend yield of 0.38%. Wingstop’s dividend payout ratio is currently 62.39%.

Wingstop, Inc is a franchisor and operator of restaurants, which engages in the provision of cooked-to-order, hand-sauced, and tossed chicken wings. It operates through Franchise and Company segments. The Franchise segment consists of domestic and international franchise restaurants. The Company segment comprises company-owned restaurants.

Featured Article: Capital gains and your 401(k) or IRA 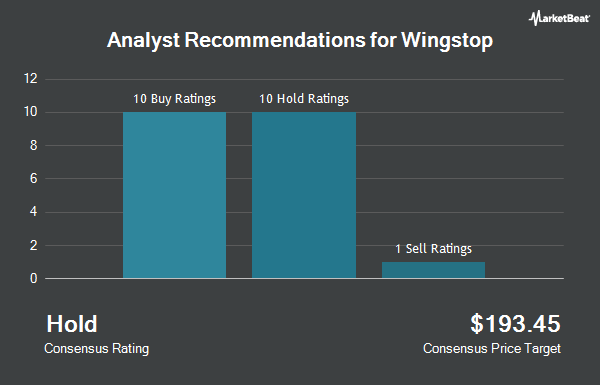 Receive News & Ratings for Wingstop Daily - Enter your email address below to receive a concise daily summary of the latest news and analysts' ratings for Wingstop and related companies with MarketBeat.com's FREE daily email newsletter.

Complete the form below to receive the latest headlines and analysts' recommendations for Wingstop with our free daily email newsletter: