Shares of The Blackstone Group Inc. (NYSE:BX) have been assigned an average rating of “Buy” from the eleven ratings firms that are presently covering the firm, Marketbeat.com reports. Five research analysts have rated the stock with a hold rating and six have given a buy rating to the company. The average 12-month price target among analysts that have covered the stock in the last year is $102.60.

In other news, major shareholder Holdings L.P. Blackstone II sold 335,000 shares of the firm’s stock in a transaction on Tuesday, August 24th. The stock was sold at an average price of $60.00, for a total value of $20,100,000.00. The transaction was disclosed in a legal filing with the Securities & Exchange Commission, which is available at this hyperlink. Also, major shareholder Lifesciences Iii L.P. Clarus purchased 150,000 shares of the stock in a transaction on Tuesday, July 20th. The shares were purchased at an average cost of $16.00 per share, with a total value of $2,400,000.00. The disclosure for this purchase can be found here. Insiders sold a total of 508,477 shares of company stock valued at $40,210,412 in the last three months. Insiders own 1.00% of the company’s stock.

The firm also recently disclosed a quarterly dividend, which was paid on Monday, August 9th. Stockholders of record on Monday, August 2nd were given a $0.8475 dividend. The ex-dividend date of this dividend was Friday, July 30th. This represents a $3.39 dividend on an annualized basis and a dividend yield of 2.51%. The Blackstone Group’s payout ratio is 105.66%.

About The Blackstone Group

Featured Story: What are Institutional Investors? 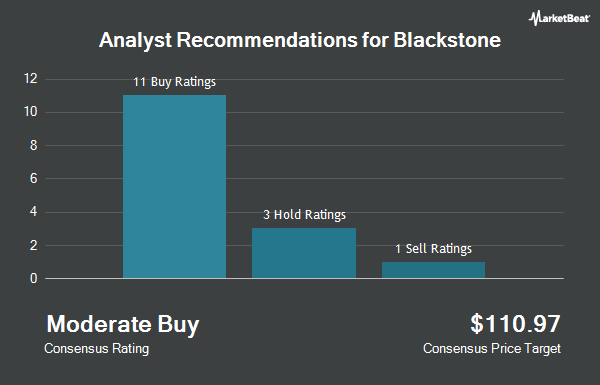 Head to Head Survey: Destination XL Group versus Its Peers

$123.30 Million in Sales Expected for Core Laboratories This Quarter

Complete the form below to receive the latest headlines and analysts' recommendations for The Blackstone Group with our free daily email newsletter: