On average, analysts expect that First Financial Bankshares will report full year sales of $510.87 million for the current fiscal year, with estimates ranging from $501.60 million to $518.90 million. For the next year, analysts forecast that the company will post sales of $508.60 million, with estimates ranging from $483.60 million to $531.90 million. Zacks Investment Research’s sales averages are a mean average based on a survey of sell-side analysts that follow First Financial Bankshares.

First Financial Bankshares (NASDAQ:FFIN) last released its quarterly earnings data on Monday, July 26th. The bank reported $0.39 earnings per share for the quarter, beating the consensus estimate of $0.38 by $0.01. The firm had revenue of $129.26 million during the quarter, compared to the consensus estimate of $128.60 million. First Financial Bankshares had a return on equity of 13.44% and a net margin of 43.97%.

The firm also recently disclosed a quarterly dividend, which will be paid on Friday, October 1st. Stockholders of record on Thursday, September 16th will be issued a dividend of $0.15 per share. This represents a $0.60 annualized dividend and a dividend yield of 1.33%. The ex-dividend date is Wednesday, September 15th. First Financial Bankshares’s dividend payout ratio (DPR) is 42.25%.

First Financial Bankshares, Inc is a bank holding company, which engages in the provision of financial and community banking services. It offers mortgage loans, savings and checking accounts, auto and equity loans, online and mobile banking, investment and trust management, and retirement plans. The company was founded in 1956 and is headquartered in Abilene, TX.

Further Reading: How is inflation measured? 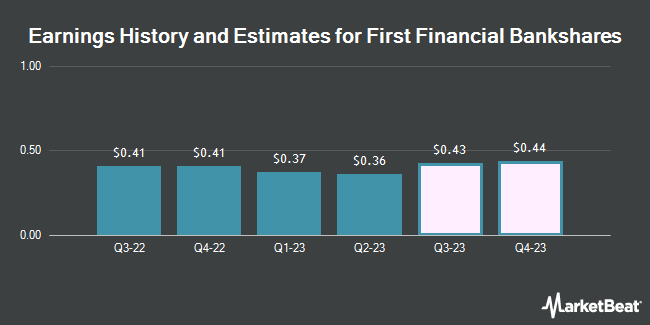 Complete the form below to receive the latest headlines and analysts' recommendations for First Financial Bankshares with our free daily email newsletter: