Wall Street brokerages expect that LivePerson, Inc. (NASDAQ:LPSN) will report sales of $118.15 million for the current fiscal quarter, Zacks Investment Research reports. Seven analysts have provided estimates for LivePerson’s earnings, with the lowest sales estimate coming in at $117.90 million and the highest estimate coming in at $118.60 million. LivePerson posted sales of $94.80 million during the same quarter last year, which would indicate a positive year-over-year growth rate of 24.6%. The firm is scheduled to report its next quarterly earnings results on Thursday, November 4th.

According to Zacks, analysts expect that LivePerson will report full year sales of $468.15 million for the current year, with estimates ranging from $465.74 million to $471.10 million. For the next year, analysts forecast that the firm will report sales of $587.71 million, with estimates ranging from $569.20 million to $598.20 million. Zacks Investment Research’s sales averages are an average based on a survey of sell-side research firms that follow LivePerson.

LivePerson (NASDAQ:LPSN) last announced its quarterly earnings data on Tuesday, August 3rd. The technology company reported ($0.29) earnings per share for the quarter, topping the Zacks’ consensus estimate of ($0.41) by $0.12. The business had revenue of $119.61 million for the quarter, compared to analysts’ expectations of $112.91 million. LivePerson had a negative net margin of 22.21% and a negative return on equity of 33.93%.

LivePerson, Inc engages in the provision of mobile and online messaging solutions. It operates through the following segments: Business, Consumer, and Corporate. The Business segment enables brands to leverage intelligence engine to connect with consumers through an integrated suite of mobile and online business messaging technologies.

Recommended Story: What economic reports are most valuable to investors? 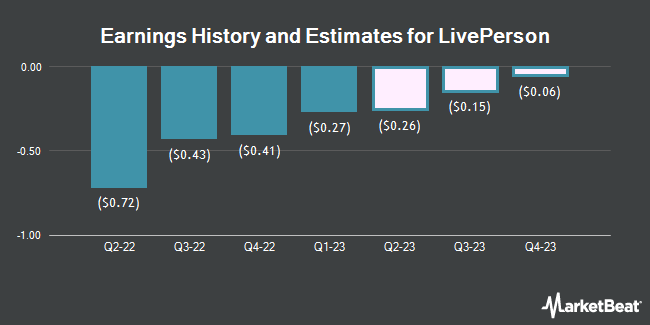 Complete the form below to receive the latest headlines and analysts' recommendations for LivePerson with our free daily email newsletter: