Altium Capital Management LP purchased a new position in Tarsus Pharmaceuticals, Inc. (NASDAQ:TARS) in the second quarter, according to the company in its most recent disclosure with the Securities & Exchange Commission. The fund purchased 70,573 shares of the company’s stock, valued at approximately $2,045,000. Altium Capital Management LP owned about 0.34% of Tarsus Pharmaceuticals at the end of the most recent reporting period.

Tarsus Pharmaceuticals (NASDAQ:TARS) last announced its earnings results on Wednesday, August 4th. The company reported $0.29 EPS for the quarter, topping the consensus estimate of ($0.52) by $0.81. The business had revenue of $22.02 million during the quarter, compared to analyst estimates of $10.00 million. On average, research analysts expect that Tarsus Pharmaceuticals, Inc. will post -0.23 earnings per share for the current fiscal year.

Tarsus Pharmaceuticals, Inc, a clinical-stage biopharmaceutical company, focuses on the development and commercialization of novel therapeutic candidates for ophthalmic conditions. Its lead product candidate is TP-03, a novel therapeutic that is in Phase IIb/III for the treatment of blepharitis caused by the infestation of Demodex mites, as well as to treat meibomian gland disease. 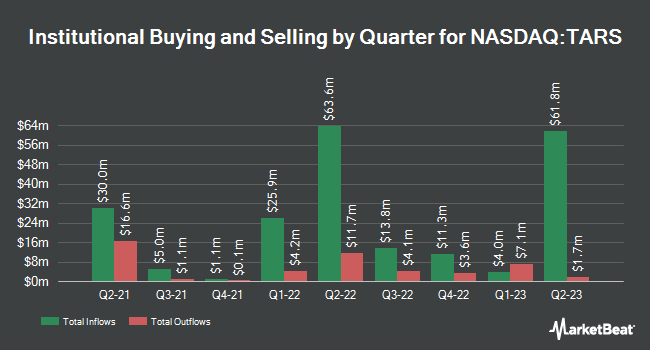 Complete the form below to receive the latest headlines and analysts' recommendations for Tarsus Pharmaceuticals with our free daily email newsletter: