Shares of Atlas Corp. (NYSE:ATCO) have received an average rating of “Hold” from the seven research firms that are presently covering the firm, MarketBeat reports. Four analysts have rated the stock with a hold rating and two have given a buy rating to the company. The average 12-month price objective among brokerages that have issued ratings on the stock in the last year is $21.40.

Several brokerages have weighed in on ATCO. Citigroup began coverage on Atlas in a report on Wednesday, October 6th. They issued a “neutral” rating and a $16.00 price target for the company. Zacks Investment Research downgraded Atlas from a “buy” rating to a “hold” rating in a report on Friday, August 20th.

Atlas (NYSE:ATCO) last posted its earnings results on Sunday, August 8th. The company reported $0.39 earnings per share (EPS) for the quarter, beating the consensus estimate of $0.31 by $0.08. Atlas had a return on equity of 10.28% and a net margin of 14.62%. The company had revenue of $393.90 million for the quarter, compared to analyst estimates of $387.81 million. During the same quarter in the previous year, the firm earned $0.64 earnings per share. The firm’s quarterly revenue was up 5.7% compared to the same quarter last year. As a group, equities analysts expect that Atlas will post 1.36 EPS for the current year.

The company also recently announced a quarterly dividend, which will be paid on Monday, November 1st. Investors of record on Wednesday, October 20th will be issued a dividend of $0.125 per share. This represents a $0.50 dividend on an annualized basis and a dividend yield of 3.51%. The ex-dividend date of this dividend is Tuesday, October 19th. Atlas’s dividend payout ratio (DPR) is 51.55%.

Atlas Corp. operates as a global asset manager that owns and operates the businesses in which it invests. It focuses on deploying capital across multiple verticals to create growth opportunities for its shareholders. The firm operates through two subsidiaries, Seaspan and APR. Seaspan is an independent charter owner and operator of containerships and APR provides mobile power solutions. 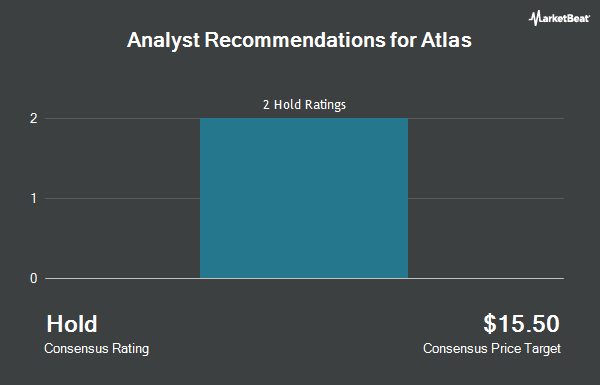 Receive News & Ratings for Atlas Daily - Enter your email address below to receive a concise daily summary of the latest news and analysts' ratings for Atlas and related companies with MarketBeat.com's FREE daily email newsletter.

Deutsche Bank Aktiengesellschaft Given Consensus Rating of “Hold” by Brokerages

Complete the form below to receive the latest headlines and analysts' recommendations for Atlas with our free daily email newsletter: