Cherry Creek Investment Advisors Inc. purchased a new stake in shares of Stereotaxis, Inc. (NYSEAMERICAN:STXS) during the 2nd quarter, according to its most recent disclosure with the SEC. The fund purchased 25,578 shares of the company’s stock, valued at approximately $247,000.

Stereotaxis (NYSEAMERICAN:STXS) last issued its earnings results on Tuesday, August 10th. The company reported ($0.02) earnings per share for the quarter, topping analysts’ consensus estimates of ($0.03) by $0.01. The firm had revenue of $9.05 million during the quarter, compared to analyst estimates of $8.20 million. Stereotaxis had a negative net margin of 16.55% and a negative return on equity of 15.61%. Sell-side analysts expect that Stereotaxis, Inc. will post -0.12 EPS for the current year.

Stereotaxis, Inc designs, manufactures and markets robotic magnetic navigation systems for use in a hospital’s interventional surgical suite to enhance the treatment of arrhythmias and coronary artery disease. Its products include the Genesis RMN System, the Odyssey Solution, and related devices. The firm also offers the Stereotaxis Imaging Model S x-ray System.

Further Reading: How does the Beige Book influence monetary policy?

Want to see what other hedge funds are holding STXS? Visit HoldingsChannel.com to get the latest 13F filings and insider trades for Stereotaxis, Inc. (NYSEAMERICAN:STXS). 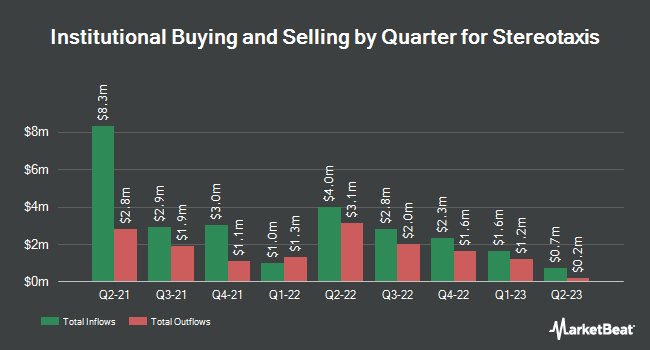 Complete the form below to receive the latest headlines and analysts' recommendations for Stereotaxis with our free daily email newsletter: