DermTech, Inc. (NASDAQ:DMTK) has been given a consensus recommendation of “Buy” by the seven ratings firms that are currently covering the firm, Marketbeat reports. One analyst has rated the stock with a hold rating and five have given a buy rating to the company. The average 12-month price objective among brokers that have issued ratings on the stock in the last year is $65.00.

Separately, Zacks Investment Research raised DermTech from a “sell” rating to a “hold” rating in a research note on Tuesday, July 20th.

DermTech (NASDAQ:DMTK) last posted its quarterly earnings data on Wednesday, August 4th. The company reported ($0.48) EPS for the quarter, beating the Thomson Reuters’ consensus estimate of ($0.54) by $0.06. DermTech had a negative return on equity of 28.74% and a negative net margin of 558.38%. The firm had revenue of $3.12 million during the quarter, compared to the consensus estimate of $2.80 million. On average, sell-side analysts forecast that DermTech will post -2.48 earnings per share for the current fiscal year.

In other news, insider Todd Michael Wood sold 1,126 shares of the stock in a transaction on Monday, September 13th. The stock was sold at an average price of $36.19, for a total transaction of $40,749.94. The transaction was disclosed in a legal filing with the Securities & Exchange Commission, which can be accessed through this link. Also, CFO Kevin M. Sun sold 4,276 shares of the firm’s stock in a transaction dated Wednesday, September 8th. The shares were sold at an average price of $36.19, for a total value of $154,748.44. The disclosure for this sale can be found here. Over the last quarter, insiders have sold 13,004 shares of company stock valued at $470,580. Company insiders own 8.00% of the company’s stock.

DermTech, Inc is a genomics company in dermatology, which engages in the development and sale of products for the diagnosis and treatment of skin diseases. It markets and develops products that facilitate the early detection of skin cancers, assesses inflammatory diseases, and customizes drug treatments. 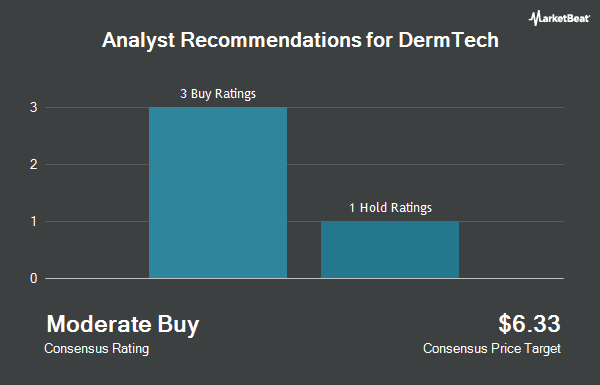 Receive News & Ratings for DermTech Daily - Enter your email address below to receive a concise daily summary of the latest news and analysts' ratings for DermTech and related companies with MarketBeat.com's FREE daily email newsletter.

Complete the form below to receive the latest headlines and analysts' recommendations for DermTech with our free daily email newsletter: