Shares of First Solar, Inc. (NASDAQ:FSLR) have been assigned a consensus recommendation of “Hold” from the twenty-four ratings firms that are covering the stock, Marketbeat reports. Two investment analysts have rated the stock with a sell rating, thirteen have given a hold rating and eight have issued a buy rating on the company. The average twelve-month price target among analysts that have covered the stock in the last year is $107.35.

First Solar (NASDAQ:FSLR) last posted its quarterly earnings results on Thursday, November 4th. The solar cell manufacturer reported $0.42 earnings per share (EPS) for the quarter, missing the consensus estimate of $0.60 by ($0.18). The company had revenue of $583.50 million during the quarter, compared to analyst estimates of $688.10 million. First Solar had a net margin of 17.26% and a return on equity of 7.94%. The company’s revenue was down 37.1% on a year-over-year basis. During the same period in the prior year, the company earned $1.45 earnings per share. Equities analysts expect that First Solar will post 4.23 earnings per share for the current year.

First Solar, Inc engages in designing, manufacturing, marketing, and distribution of photovoltaic solar power systems and solar modules. It operates through the Modules and Systems segments. The Modules segment involves in the design, manufacture, and sale of cadmium telluride solar modules, which convert sunlight into electricity. 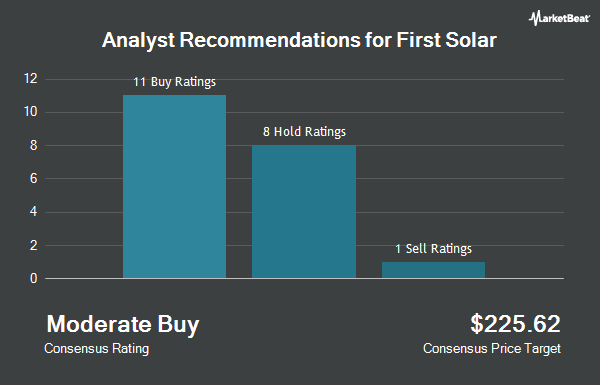 Persimmon Downgraded by Barclays to Underweight

Complete the form below to receive the latest headlines and analysts' recommendations for First Solar with our free daily email newsletter: