Marshall Wace LLP purchased a new stake in Raymond James (NYSE:RJF) during the 2nd quarter, according to its most recent 13F filing with the Securities & Exchange Commission. The institutional investor purchased 7,732 shares of the financial services provider’s stock, valued at approximately $1,004,000.

In related news, insider James E. Bunn sold 15,166 shares of Raymond James stock in a transaction on Thursday, November 11th. The stock was sold at an average price of $100.73, for a total value of $1,527,671.18. The transaction was disclosed in a document filed with the Securities & Exchange Commission, which is available through the SEC website. Company insiders own 10.68% of the company’s stock.

Raymond James (NYSE:RJF) last announced its earnings results on Wednesday, October 27th. The financial services provider reported $2.06 EPS for the quarter, beating analysts’ consensus estimates of $1.71 by $0.35. The business had revenue of $2.70 billion during the quarter, compared to analysts’ expectations of $2.54 billion. Raymond James had a return on equity of 19.47% and a net margin of 14.16%. The business’s revenue was up 29.6% compared to the same quarter last year. During the same quarter in the prior year, the firm earned $1.19 earnings per share. As a group, equities analysts anticipate that Raymond James will post 6.78 EPS for the current fiscal year.

The business also recently announced a dividend, which was paid on Tuesday, September 21st. Investors of record on Thursday, September 23rd were issued a $0.39 dividend. The ex-dividend date was Wednesday, September 22nd. This represents a yield of 1.16%. Raymond James’s dividend payout ratio (DPR) is presently 15.68%.

Raymond James Financial, Inc, a financial holding company, through its subsidiaries, engages in the underwriting, distribution, trading, and brokerage of equity and debt securities, and the sale of mutual funds and other investment products in the United States, Canada, Europe, and internationally. The company operates through Private Client Group, Capital Markets, Asset Management, RJ Bank, and Other segments. 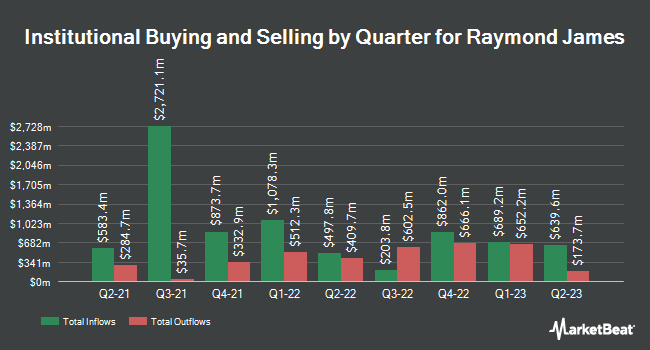 $0.54 Earnings Per Share Expected for Compass Diversified This Quarter

Complete the form below to receive the latest headlines and analysts' recommendations for Raymond James with our free daily email newsletter: