Brokerages expect Enerpac Tool Group Corp. (NYSE:EPAC) to announce $0.13 earnings per share (EPS) for the current fiscal quarter, according to Zacks Investment Research. Two analysts have issued estimates for Enerpac Tool Group’s earnings, with estimates ranging from $0.10 to $0.15. Enerpac Tool Group reported earnings of $0.06 per share in the same quarter last year, which suggests a positive year-over-year growth rate of 116.7%. The business is expected to report its next earnings report on Wednesday, March 23rd.

According to Zacks, analysts expect that Enerpac Tool Group will report full-year earnings of $0.95 per share for the current financial year, with EPS estimates ranging from $0.93 to $0.96. For the next fiscal year, analysts forecast that the firm will post earnings of $1.12 per share, with EPS estimates ranging from $1.08 to $1.15. Zacks’ earnings per share averages are an average based on a survey of research firms that that provide coverage for Enerpac Tool Group.

Enerpac Tool Group (NYSE:EPAC) last posted its earnings results on Tuesday, December 21st. The company reported $0.16 earnings per share for the quarter, missing the Zacks’ consensus estimate of $0.21 by ($0.05). Enerpac Tool Group had a return on equity of 10.48% and a net margin of 6.71%. The business had revenue of $130.90 million for the quarter, compared to the consensus estimate of $141.24 million. During the same period in the previous year, the firm earned $0.09 earnings per share. The company’s revenue was up 9.6% compared to the same quarter last year.

In related news, Director E James Ferland, Jr. bought 2,000 shares of the company’s stock in a transaction that occurred on Tuesday, October 26th. The shares were bought at an average price of $20.26 per share, for a total transaction of $40,520.00. The transaction was disclosed in a legal filing with the SEC, which can be accessed through the SEC website. 0.41% of the stock is owned by insiders.

Enerpac Tool Group Corp. is a diversified industrial company. The firm engages in the designing, manufacturing, and distribution of industrial products and systems to various end markets. It operates through the following segments: Industrial Tools and Services; and Other. The Industrial Tools and Services segment supplies both products and services to a broad array of end markets, including industrial, energy, mining and production automation markets.

Featured Article: Cyclical Stocks – What You Should Know 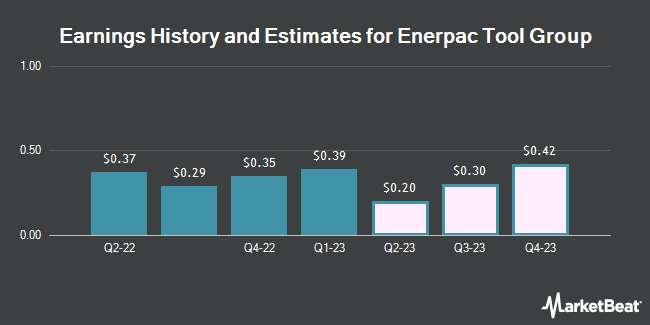 Complete the form below to receive the latest headlines and analysts' recommendations for Enerpac Tool Group with our free daily email newsletter: