SG Americas Securities LLC bought a new position in WideOpenWest, Inc. (NYSE:WOW) in the third quarter, according to its most recent filing with the Securities and Exchange Commission (SEC). The fund bought 27,948 shares of the company’s stock, valued at approximately $549,000.

Several research firms have recently issued reports on WOW. Credit Suisse Group upped their price objective on shares of WideOpenWest from $17.00 to $19.00 and gave the company a “neutral” rating in a report on Friday, December 10th. Zacks Investment Research downgraded shares of WideOpenWest from a “buy” rating to a “hold” rating in a report on Tuesday, November 9th. Three equities research analysts have rated the stock with a hold rating, six have given a buy rating and one has given a strong buy rating to the stock. Based on data from MarketBeat.com, the stock currently has a consensus rating of “Buy” and a consensus target price of $24.40.

WideOpenWest (NYSE:WOW) last issued its quarterly earnings data on Monday, November 8th. The company reported $6.24 earnings per share for the quarter, topping analysts’ consensus estimates of $0.20 by $6.04. The firm had revenue of $267.70 million during the quarter, compared to analyst estimates of $254.14 million. The company’s revenue was down 7.3% on a year-over-year basis. During the same quarter last year, the company posted $0.11 EPS. Equities research analysts forecast that WideOpenWest, Inc. will post 0.09 EPS for the current year.

WideOpenWest, Inc engages in the provision of internet, cable television, and voice over IP-based services to residential and business customers. Its products include high-speed data, video, and telephony. The company was founded in 2001 and is headquartered in Englewood, CO. 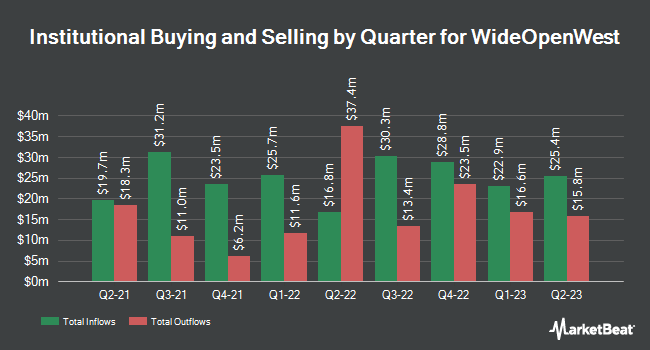 Critical Contrast: Bandwidth versus Where Food Comes From

Complete the form below to receive the latest headlines and analysts' recommendations for WideOpenWest with our free daily email newsletter: