Whiting Petroleum (NYSE:WLL) last announced its quarterly earnings results on Wednesday, November 3rd. The oil and gas exploration company reported $3.57 EPS for the quarter, topping analysts’ consensus estimates of $3.06 by $0.51. The business had revenue of $401.04 million during the quarter, compared to analysts’ expectations of $310.70 million. As a group, research analysts predict that Whiting Petroleum Co. will post 13.5 EPS for the current year.

In other Whiting Petroleum news, Director Daniel J. Iv Rice purchased 15,150 shares of the company’s stock in a transaction that occurred on Friday, November 12th. The stock was bought at an average price of $67.66 per share, with a total value of $1,025,049.00. The purchase was disclosed in a document filed with the Securities & Exchange Commission, which can be accessed through the SEC website. Company insiders own 0.12% of the company’s stock.

Whiting Petroleum Corp. engages in the development, production, acquisition, and exploration of oil and gas properties. It operates in the Rocky Mountains regions. The company was founded by Kenneth R. Whiting and J. Bert Ladd in January 1980 and is headquartered in Denver, CO.

Want to see what other hedge funds are holding WLL? Visit HoldingsChannel.com to get the latest 13F filings and insider trades for Whiting Petroleum Co. (NYSE:WLL). 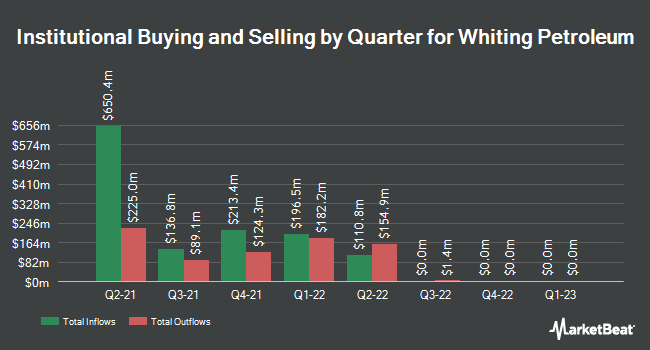 Complete the form below to receive the latest headlines and analysts' recommendations for Whiting Petroleum with our free daily email newsletter: