Cheniere Energy Partners (NYSEAMERICAN:CQP) was downgraded by stock analysts at The Goldman Sachs Group from a “buy” rating to a “neutral” rating in a research report issued on Thursday, Price Targets.com reports. They currently have a $45.00 target price on the energy company’s stock. The Goldman Sachs Group’s price target indicates a potential downside of 3.74% from the stock’s current price. The analysts noted that the move was a valuation call.

Cheniere Energy Partners (NYSEAMERICAN:CQP) last posted its quarterly earnings data on Thursday, November 4th. The energy company reported $0.69 earnings per share (EPS) for the quarter, beating the Zacks’ consensus estimate of $0.68 by $0.01. The firm had revenue of $2.32 billion during the quarter, compared to the consensus estimate of $1.88 billion. Cheniere Energy Partners had a net margin of 18.75% and a return on equity of 274.31%. The business’s revenue for the quarter was up 136.7% compared to the same quarter last year. During the same quarter in the previous year, the firm posted ($0.08) EPS. On average, research analysts forecast that Cheniere Energy Partners will post 2.94 earnings per share for the current fiscal year. 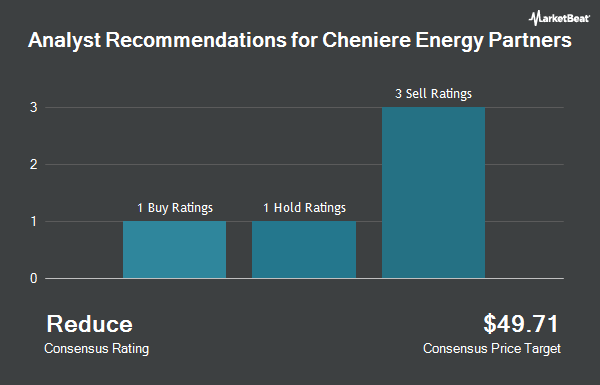 Populous Trading Down 19.9% Over Last Week

Complete the form below to receive the latest headlines and analysts' recommendations for Cheniere Energy Partners with our free daily email newsletter: