iRhythm Technologies (NASDAQ:IRTC) had its price target raised by Truist from $130.00 to $185.00 in a research note issued on Thursday, The Fly reports. Truist’s price objective would suggest a potential upside of 31.11% from the stock’s current price.

iRhythm Technologies (NASDAQ:IRTC) last released its quarterly earnings data on Thursday, November 4th. The company reported ($0.81) EPS for the quarter, beating the consensus estimate of ($1.09) by $0.28. iRhythm Technologies had a negative return on equity of 25.06% and a negative net margin of 24.55%. The company had revenue of $85.43 million for the quarter, compared to analyst estimates of $83.65 million. During the same period last year, the company posted ($0.17) earnings per share. The firm’s revenue was up 18.7% compared to the same quarter last year. As a group, sell-side analysts predict that iRhythm Technologies will post -3.58 EPS for the current year.

iRhythm Technologies, Inc engages in the development of monitoring and diagnostic solutions for detection of cardiac arrhythmias. It offers Zio XT, is a wearable patch-based biosensor, continuously records, and stores ECG data from every patient heartbeat for up to 14 consecutive days; and Zio AT, also provides ECG data but also provides physicians with actionable notifications during the wear period. 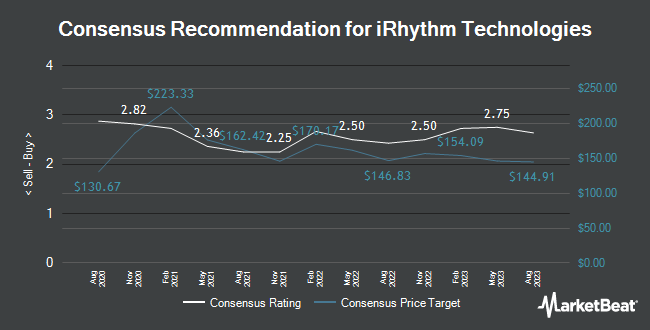 SafeCoin Trading Down 42.6% This Week

Complete the form below to receive the latest headlines and analysts' recommendations for iRhythm Technologies with our free daily email newsletter: