PGT Innovations (NYSE:PGTI – Get Rating) released its earnings results on Thursday. The construction company reported $0.42 earnings per share (EPS) for the quarter, beating analysts’ consensus estimates of $0.37 by $0.05, MarketWatch Earnings reports. PGT Innovations had a return on equity of 11.66% and a net margin of 2.70%. The company had revenue of $358.66 million during the quarter, compared to analyst estimates of $336.25 million. During the same quarter in the prior year, the company earned $0.27 earnings per share. The company’s revenue for the quarter was up 32.3% on a year-over-year basis. PGT Innovations updated its FY 2022 guidance to EPS.

About PGT Innovations (Get Rating)

PGT Innovations, Inc, together with its subsidiaries manufactures and supplies impact-resistant aluminum frame windows and doors in the United States and internationally. The company provides heavy-duty aluminum or vinyl frames with laminated glass to provide protection from hurricane-force winds and wind-borne debris; and non-impact resistant vinyl windows with insulating glass and multi-chambered frames for various climate zones. 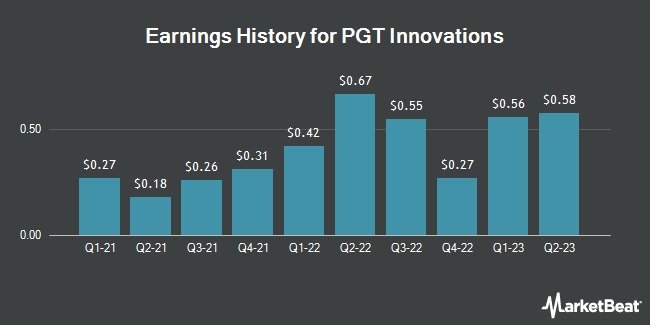 Complete the form below to receive the latest headlines and analysts' recommendations for PGT Innovations with our free daily email newsletter: