Norwegian Cruise Line (NYSE:NCLH – Get Rating) had its target price lowered by Deutsche Bank Aktiengesellschaft from $23.00 to $17.00 in a research report sent to investors on Tuesday morning, The Fly reports.

Norwegian Cruise Line (NYSE:NCLH – Get Rating) last issued its quarterly earnings results on Tuesday, May 10th. The company reported ($1.82) earnings per share (EPS) for the quarter, missing analysts’ consensus estimates of ($1.53) by ($0.29). The company had revenue of $521.90 million during the quarter, compared to the consensus estimate of $760.34 million. Norwegian Cruise Line had a negative return on equity of 116.64% and a negative net margin of 353.02%. The firm’s quarterly revenue was up 16735.5% compared to the same quarter last year. During the same quarter in the prior year, the business earned ($2.03) earnings per share. As a group, equities analysts predict that Norwegian Cruise Line will post -2.38 EPS for the current fiscal year.

In related news, Director Russell W. Galbut purchased 100,000 shares of Norwegian Cruise Line stock in a transaction that occurred on Monday, May 23rd. The stock was bought at an average cost of $15.12 per share, for a total transaction of $1,512,000.00. Following the completion of the transaction, the director now owns 489,917 shares in the company, valued at $7,407,545.04. The acquisition was disclosed in a filing with the Securities & Exchange Commission, which is available at the SEC website. 0.94% of the stock is currently owned by company insiders.

About Norwegian Cruise Line (Get Rating)

Norwegian Cruise Line Holdings Ltd., together with its subsidiaries, operates as a cruise company in North America, Europe, the Asia-Pacific, and internationally. The company operates the Norwegian Cruise Line, Oceania Cruises, and Regent Seven Seas Cruises brands. It offers itineraries ranging from three days to a 180-days calling on various locations, including destinations in Scandinavia, Russia, the Mediterranean, the Greek Isles, Alaska, Canada and New England, Hawaii, Asia, Tahiti and the South Pacific, Australia and New Zealand, Africa, India, South America, the Panama Canal, and the Caribbean. 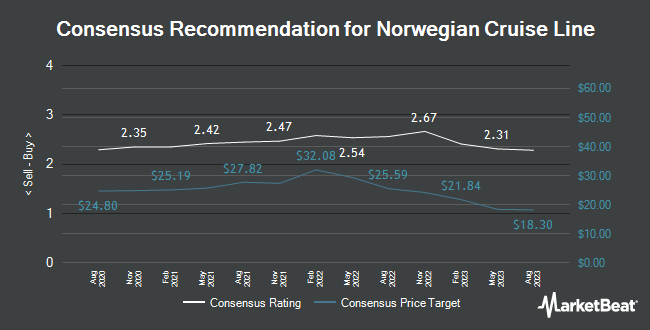 Complete the form below to receive the latest headlines and analysts' recommendations for Norwegian Cruise Line with our free daily email newsletter: