The business also recently announced a quarterly dividend, which will be paid on Tuesday, October 4th. Stockholders of record on Wednesday, September 21st will be issued a $0.021 dividend. This represents a $0.08 annualized dividend and a dividend yield of 0.52%. The ex-dividend date of this dividend is Tuesday, September 20th. Orion Engineered Carbons’s dividend payout ratio (DPR) is presently 3.39%.

Separately, StockNews.com downgraded shares of Orion Engineered Carbons from a “buy” rating to a “hold” rating in a report on Tuesday, May 17th.

In other Orion Engineered Carbons news, CFO Jeffrey Glajch purchased 5,000 shares of the firm’s stock in a transaction that occurred on Wednesday, May 11th. The shares were bought at an average price of $17.03 per share, with a total value of $85,150.00. Following the completion of the purchase, the chief financial officer now directly owns 15,000 shares in the company, valued at $255,450. The transaction was disclosed in a legal filing with the Securities & Exchange Commission, which is accessible through this hyperlink. 0.90% of the stock is owned by insiders. 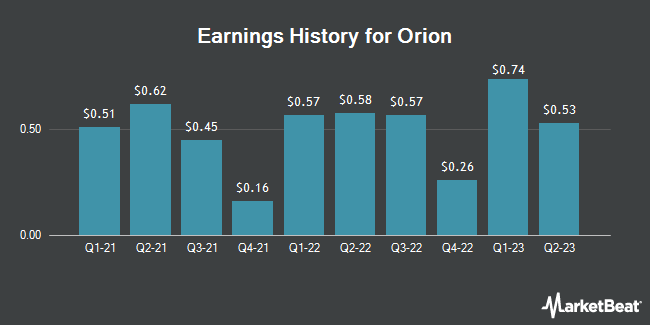 Complete the form below to receive the latest headlines and analysts' recommendations for Orion Engineered Carbons with our free daily email newsletter: