Blueprint Medicines (NASDAQ:BPMC – Get Rating) had its target price upped by The Goldman Sachs Group from $126.00 to $143.00 in a research report released on Wednesday, Marketbeat Ratings reports. The firm currently has a buy rating on the biotechnology company’s stock.

Blueprint Medicines (NASDAQ:BPMC – Get Rating) last posted its quarterly earnings results on Tuesday, August 2nd. The biotechnology company reported ($2.68) earnings per share (EPS) for the quarter, missing analysts’ consensus estimates of ($2.23) by ($0.45). Blueprint Medicines had a negative return on equity of 45.89% and a negative net margin of 304.41%. The business had revenue of $36.55 million during the quarter, compared to the consensus estimate of $37.61 million. During the same quarter in the previous year, the business posted ($1.86) earnings per share. The company’s quarterly revenue was up 33.9% compared to the same quarter last year. On average, equities research analysts forecast that Blueprint Medicines will post -9.11 earnings per share for the current year.

In other Blueprint Medicines news, insider Percy H. Carter sold 1,908 shares of the firm’s stock in a transaction dated Monday, June 6th. The shares were sold at an average price of $59.76, for a total transaction of $114,022.08. Following the transaction, the insider now owns 28,685 shares of the company’s stock, valued at approximately $1,714,215.60. The transaction was disclosed in a filing with the SEC, which can be accessed through this link. 3.34% of the stock is owned by corporate insiders. 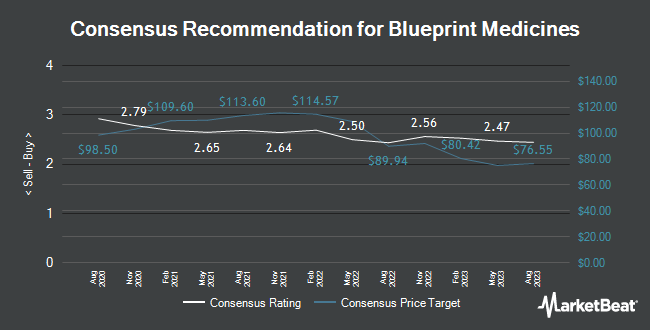 Complete the form below to receive the latest headlines and analysts' recommendations for Blueprint Medicines with our free daily email newsletter: